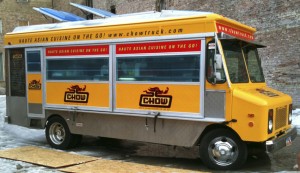 SALT LAKE CITY — Not all mobile food is governed the same in Salt Lake City. Food carts do not have to follow the same rules mobile food trucks do.

On Salt Lake City’s website, it states, “Food trucks are regulated under the zoning ordinance, and the regulations are fairly restrictive based on the old ‘roach-coach’ model.”

So, city leaders want to make some changes. These changes include spacing regulations, idling ordinances and sign regulations. Another change being considered is allowing trucks to spend more time at a certain location.

“It’s regulated that we are to move every two hours,” said SuAn Chow, owner of The Chow Truck. “It makes it really difficult.”

Chow said customers can sometimes have a hard time keeping up with the moving around she has to do. Plus, she has to pack up her gear when she moves; this cuts into the amount of time she has to sell her food. If the changes proposed by the city are adopted, food truck operators can stay in one location for up to 24 hours.

The city also is looking into differentiating between the different types of trucks since not every food truck operates in the same way.

“When you promote it as it being upscale, gourmet food, immediately it takes it into an entirely different level,” Chow said.

In addition, there could be changes to where the trucks can go in the first place. Chow said there are certain city parks and lots that she had no access to. She said it would be a win-win situation if trucks could park in certain city lots during ski season.

“Some of the city lots where people can park and where the shuttles are, I don’t have access to those. A lot of skiers and a lot of people who come down from the canyon, they just want something really quick. Or, if the canyon gets closed, they’d love to have a little bite to eat,” she explained.

Chow agreed that a lot of people may think of the unsanitary “roach coach” when they think of mobile food trucks. But she said she has to follow the same rules and ordinances restaurants do, sometimes even more strictly.

“Sometimes, in the summer time when I’m doing several events, I can get inspected once a week, which is way above and beyond a general restaurant (that) would receive a visit once a year,” she said.

So far, residents seem to be overwhelmingly in favor of the changes. You can post a comment on the city’s website at www.slcgov.com/opencityhall until 12 a.m. June 26.

You can also call Ray Milliner with your comments and questions at 801-535-7645 or send an email to ray.milliner@slcgov.com.