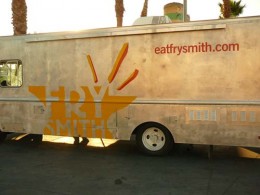 Confirmed trucks include the winner of the Food Networks’ popular show The Great Food Truck Race, Grill…’em All, which regularly draws hundreds of people to their events. Other popular trucks include Devilicious, whose cuisine is dedicated to comfort food with a twist, Lobsta Truck who features both lobster and crab rolls and Chop Soo-ey the brain child of local San Diego celebrity Chef Deborah Scott.

San Diego is home to a handful of food trucks including the Miho Gastrotruck, Joe’s on the Nose, Tabe BBQ and the Cohn Restaurant Group’s Chop Soo-ey. In the past few years, a new wave of food trucks has emerged, making food trucks the latest and hippest niche in the foodie world. These trucks are not the “roach coaches” of days of yore. These are sophisticated gourmet eateries where the food happens to be made in a kitchen that operates inside a truck. Food trucks today stand behind impressive menus with not so average menus, sometimes focusing on a particular cuisine such as Greek or BBQ, or fusion fare such as Korean-Mexican, or a dedication to one entire food category, such as shrimp, or the promise of farm to market organic ingredients.

Dates for the Food Truck Festival at area Boomers! locations:

Entrance into this event is $5 and includes a $5 game credit good for videogames, go kart racing, mini golf and more.