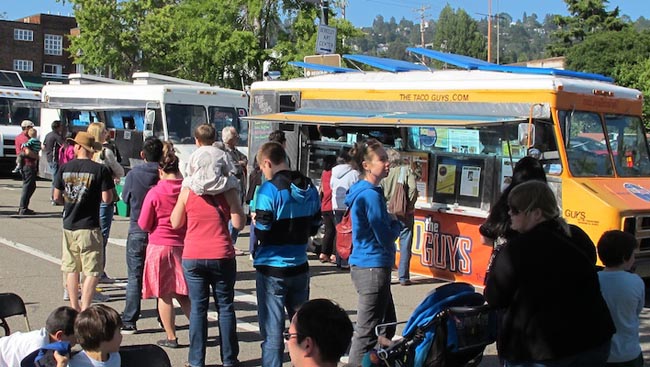 San Francisco’s burgeoning food truck movement is under fire from the local restaurant community, who argue that city restrictions on the trucks aren’t doing enough to limit their competitive effect with more-established businesses that pay high city rents.

The trendy food trucks, which have lower overhead than traditional storefronts, take their customers, the restaurants argue. Price points are typically lower though there may not be a place to sit down and enjoy your food nearby.

A recent article about the issue in the San Francisco Chronicle created a major stir among commenters, who came down on both sides of the issue.

“I can appreciate a good roach coach, are they are a valuable service in areas where there simply aren’t a lot of restaurants like in business/industrial parks. But I sympathize with restaurant owners who have to pay rent and commit to a certain location, in addition to complying with all sorts of other regulations, and then compete with interlopers that are paying very little to conduct the same business on public property. I would say the situation would be more equitable if the trucks were parking on private property that was zoned for this type of commercial use,” one respondent said.

Though some food truck gatherings do take place in that type of venue, other smaller food truck clusters happen in regular restaurant-heavy city neighborhoods.

“Food trucks don’t pay for most of the things that the restaurants pay for. People who complain about equal rights and equal opportunities need to be mindful of these factors. Food trucks don’t pay any sales tax and I doubt the owners pay any income tax. If you go to any restaurant, you are paying for the employees who work there. So support fair businesses, people,” said one restaurant supporter.

What do you think? Do food trucks have an unfair advantage? Should the regulations be more restrictive?