It’s a little taste of Hong Kong in the heart of San Francisco, a food truck which has been supplying egg tarts, milk tea and other classic Hong Kong dishes to Californians since 2012.

But 30-year-old Nikki Ma said she almost considered coming back to Hong Kong when she heard about the government’s new plans for food trucks.

“It’s a great opportunity for the next generation to try this out, there’s probably a lot of people out there who have great ideas but who don’t know how to bring it up,” she said.

Ma is the owner of Hongry Kong, a San Francisco food van which offers traditional Hong Kong dishes such as pork and chicken cutlets with noodles, dumplings and the ever-popular egg tart, her best seller. 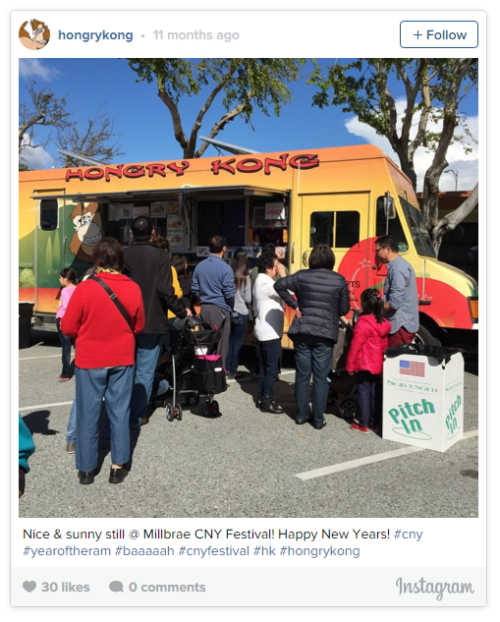 Despite being born in the United States to Hong Kong parents, Ma said she regularly comes back to visit relatives.

When she heard the Hong Kong government was going to start allowing food vans on the city’s streets, Ma said she considered coming back.

“I started looking into it when they first announced it – I don’t know, I will see after I go back to Hong Kong [in December],” she said. “It’s a very different culture.”

On Tuesday, the Hong Kong government announced 12 food trucks would be established in popular tourist areas such as Wan Chai, Tsim Tsa Tsui and Disneyland.

Ma said while she supported the idea, she wanted to see more food vans spread across Hong Kong including in remoter areas.

“Here in San Francisco we have hundreds and hundreds [including] many trucks that started in the 80s or 90s… I think [12] is not enough,” she said.

For now, Ma will continue to take Hongry Kong across the west coast of the United States, although there’s some things that you can only get in Hong Kong.

“The [egg tarts] in the US are still pretty good but they’re not that great… I prefer the ones in Hong Kong,” she said.