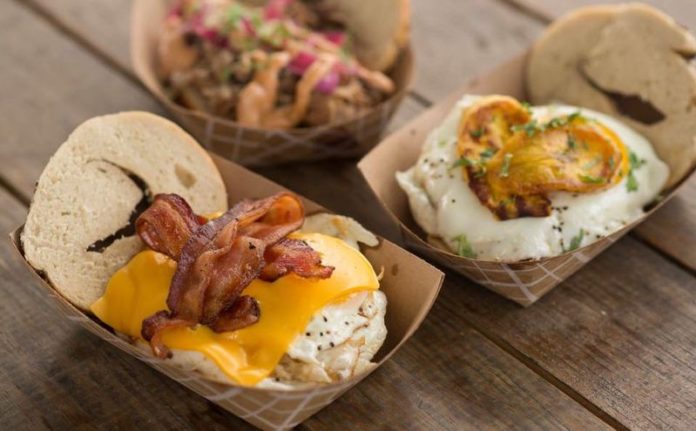 Over the past year, Puerto Rico has been in the headlines for all the wrong reasons. Its current economic crisis, which has been developing and worsening for the past 10 years, has much of the island in despair. According to the Pew Research Center, Puerto Rico’s population has decreased every year since 2006, taking the country’s economy along with it (data from the same study suggests its gross national product has declined 13 percent since 2006). However, there seems to be a silver lining. The financial crisis has turned the culinary scene up on its head — but not for the reasons you might think.

Yareli Manning, owner of San Juan food truck the Meatball Company and co-founder of the organization Food Truck Republic, is emblematic of Puerto Rico’s changing economy. Manning traded her life as a business consultant for a Fortune 500 company in Houston, Texas to open a food truck and food truck park in Puerto Rico. Inspired by the Austin street food scene, her decision seemed like a no-brainer given the low operational costs. “The food truck seemed like the right way to go,” said Manning. “There are minimal overhead costs and you can get by with few employees.” After an uphill battle to get the necessary permits, loans, and cashing out her 401K, she opened the Meatball Company in 2014, offering customers handcrafted meatballs (chicken, beef, pork, or lamb) served up in various ways: sliders, spaghetti, subs, gyros, as well as daily specials.

For chef Ricardo Anglada, owner of Nam Pla Street Food Co, moving back home after doing his culinary training in New York had always been the plan. After 10 years working in kitchens in NYC, Bahamas, China, and Hong Kong, he came to Puerto Rico in 2014 with one mission: to cook the meals he loved. “I had limited resources and was virtually unknown here in Puerto Rico,” he said. “It was not easy to get financing from banks here and I had a small amount of money saved up, so the low startup costs of a food truck seemed the most feasible for my economic situation at the time.”

Although he was aware of Puerto Rico’s economic problems prior to opening his business, Anglada did not grasp the severity until he came to the island. He opened Nam Pla in February 2015, bringing customers the street food of Vietnam, Thailand, Indonesia, and Singapore. That same year, the government raised its sales and use tax from seven percent to 11.5 percent. The effect? Everything was more expensive and people were spending less. “It was a challenge to meet and exceed the expectations,” Anglada said. “Here in Puerto Rico, there are a lot of great restaurants, but the majority of the Puerto Rican public can’t afford them anymore. People are holding back on spending because we do not know what our future holds. The public is looking for good food and innovative menus at accessible prices.”

Puerto Rico’s economic decline can be traced back to 2006, when Section 936 of the United States Revenue Code came to an end. Section 936 was a federal incentive that granted U.S. corporations partial or full exemptions from federal taxes on income earned in Puerto Rico. The island’s economy depended heavily on these incentives, since the corporations that set up subsidiaries in Puerto Rico provided jobs to a significant amount of the island’s population.

In 1996, Section 936 was repealed, and a 10-year grace period was given to the companies doing business in Puerto Rico to either stay or relocate. It came as no surprise that many companies and subsidiaries decided to close. The result? A huge drop in manufacturing jobs and a spike in the unemployment rate. During President Barack Obama’s administration, the United States kept generating jobs, and this caused unemployed Puerto Ricans to start looking for jobs on the mainland. “During the last 12 years, Puerto Rico has lost around 500,000 to 600,000 people,” said economist Heriberto Martinez.

But one of the industries that best adapted to these harsh times was the food industry. Since increasing fixed costs meant many brick-and-mortar establishments were no longer viable, this gave way to a dramatic rise in food trucks.

Traditionally — as in, over the past 25 years — food trucks in Puerto Rico served hamburgers, hot dogs, and tripletas (a cube or skirt steak, ham, and pork sandwich). Puerto Rico is best known around the world for its succulent and highly addictive comida criolla (creole food), and Puerto Ricans tend to gravitate towards items such as rice, beans, stews, pork, plantains, and other staples. That changed in 2012, when a different breed of food trucks — like pioneers Yummy Dumplings and El Ñaqui, driven by the increased costs of opening a brick-and-mortar — began operating. These food trucks threw the old and familiar menus out the window and started introducing new flavors to their customers. Both trucks quickly gathered a cult-like following and their success inspired others to take a chance and start up their own food trucks.

In 2014, there were about 15 food trucks in Puerto Rico who met the new standards. Now, there are around 80 food trucks all over the island — and this number increases monthly. Diners now have everything from ramen and pho at Tako-G, Mexican food at La Chilanguita, gourmet street food at Bluefin, Peruvian food at Perú Rico, wood-fired pizza at Del Romano, Persian food at the Mill Urban Bistro, Mediterranean at Safari Gyros, and Asian comfort food at Bento Box, just to name a few.

Slowly but surely, these food trucks have done the unimaginable: reshape the Puerto Rican palate. “I see a desire to get to know alternatives beyond rice and beans,” Manning said. “Food trucks here are able to provide a flexible menu, which allows them to take more risks.” And since most dishes at food trucks are in the $6 to $14 price range, consumers are more willing to try new things and go out of their comfort zone.

“I knew I was going to have problems introducing certain dishes to the Puerto Rican public,” said chef Pedro Padilla, owner of the Il Furgone truck. “That is why I tried to present them in a familiar manner.” With over 10 years in the food industry, Padilla wanted to bring something different to the food truck scene, and Il Furgone’s menu focuses on Italian dishes with a local touch. “I have seen a marked change in the Puerto Rican palate, they are now more willing to try new things,” Padilla said. “In a food truck, you have a direct interaction with your client. It is easier to customize a dish or prepare daily specials. A restaurant does not have this flexibility… When restaurants add specials to their menu, these are typically dishes that have been successful in the past.”

According to Anglada, the Puerto Rican palate isn’t as limited to comida criolla as some might believe. “We have great sense of what tastes good,” he said. “On the other hand, people are accustomed to eating foods a certain way here. Some customers still ask me if they can have a side order of French fries or fried plantains with their order. I try to win over my clientele with well-known dishes such as dumplings, fried rice, and noodles then move them along to more adventurous eats,” Anglada said, noting that his menu changes daily. “There is only so much food you can prepare. In a way, the food truck forces me to change the menu and I just try to have fun with it.”

Around the world, changes in the food culture has been shaped by millennials and those who seek out different alternatives when dining out — which in turn, pushes the establishments to get creative with their menus. But in Puerto Rico’s case, the nation is seeing a change with the general public, not just the younger demographic. “The move towards the casual can be seen not only here in Puerto Rico, but in the United States as well,” Anglada said. “Chefs like Daniel Humm, co-owner of the three-Michelin-starred Eleven Madison Park and the Nomad, opened the Nomad food truck back in 2016. I would not be surprised if this begins to happen here in Puerto Rico.”

Padilla points outs that many food trucks also have liquor licenses, while others allow diners to BYOB, “further reducing costs for consumers,” he said. Restaurants are hurting from this trend, and sadly, 2017 will see many local restaurants close.

What does this mean for the food scene in Puerto Rico? Only time will tell. But one thing is clear: The rapid evolution of the consumer’s palate will dictate Puerto Rico’s culinary landscape from now on. Food trucks and restaurants alike must reconcile Puerto Rico’s current economic reality with the demands of this emerging public — the challenge will be in continuing to innovate and provide high quality food at affordable prices.