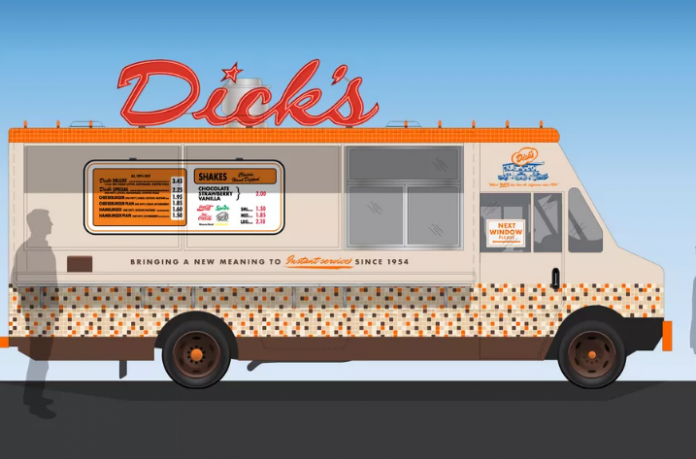 For the first time in its 66 year-old history, iconic local fast food chain Dick’s Drive-In will debut a food truck — and the franchise announced Wednesday where the mobile operation will stop by later this fall: Bellevue, Bellingham, Everett, Renton, and West Seattle.

A few weeks ago, the restaurant had posted an online form for people to suggest which Western Washington cities should host the trucks first, and those five areas made the initial cut based on the vote tally. The trucks should be ready to roll by mid-November, although there are no specific locations secured yet for the announced spots. A rep for Dick’s tells Eater Seattle the company is still waiting for final poll numbers to come in before the effort moves forward.

When it officially hits the road, the food truck will serve the full menu of its famed deluxe burgers, shakes, and beverages. It won’t have fries (only chips), but if the mobile operation is successful, there could be a fry truck in the future.

Dick’s is also on the hunt for a permanent location on the Eastside, and is soliciting feedback for that as well. On the official website, the franchise asks fans to share properties for sale in the area and to vote on their favorite Eastside city for the food truck to visit in the interim, after Bellevue.

Since it opened in Wallingford in 1954, the Dick’s franchise has steadily expanded and now has five locations in Seattle, one in Kent, and one in Edmonds. But there are plenty of regions it hasn’t reached yet, and the growth in all directions is significant. After it opened its Kent spot, the franchise made a promise that the Eastside would be considered for the next permanent location (hence the newest fan vote), while Bellingham and Everett marks the furthest north the chain has gone so far.

Meanwhile, the new food trucks will coincide with a high-profile chef collaboration this fall. In October, JuneBaby’s Edouardo Jordan is going to lend his skills for a special pop-up at the chain’s Queen Anne location. For $17.50 a person, diners will get a chance to sample the Jordan’s take on the Dick’s menu, including pimento cheese deluxe burgers, fries with Cajun sauce, and a spiced sweet potato cookie shake.