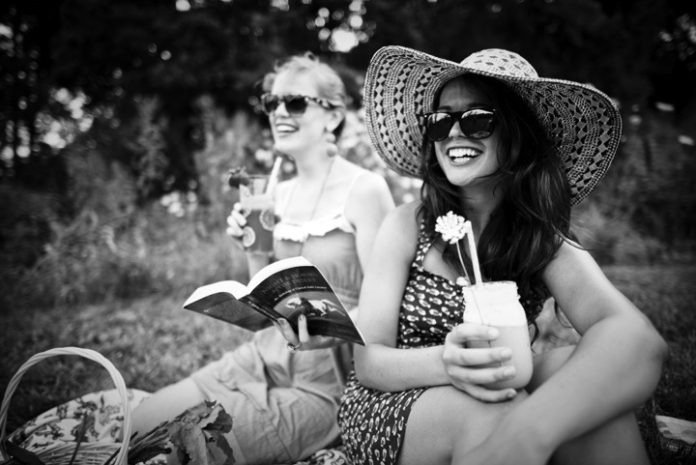 The Boston food truck scene has taken off in the last year, from grilled cheese and cupcakes to popsicles and barbecue, almost anything you can dream up is being served on wheels these days. And soon, there will be a whole new kind of truck in town selling fresh juices, smoothies and healthy snacks. Mother Juice, the brainchild of Ellen Fitzgerald and Claire Schlemme, was recently funded through a Kickstarter campaign and will soon be coming to a neighborhood near you.

“It’s a new edition to the Boston food truck scene. It’s a market that’s not totally saturated yet,” said Schlemme, a Somerville resident.

Fitzgerald and Schlemme met about a year ago when they started working at a local environmental consulting firm on the Cambridge/Somerville line on the same day. They became fast friends and often went to lunch together. It was on these breaks that they began dreaming of creating a local juice business that would bring healthy snacks to the masses.

Their original idea was to set up at farmers markets and have people bring the produce they purchased over to get juiced. Unfortunately the health department wouldn’t let them do that, but the department did encourage them to pursue the idea by getting a food truck to make and serve the juice in.

Fitzgerald and Schlemme didn’t have the funds to purchase a truck right away, so they signed up for a Kickstarter campaign, where they found an incredible amount of support for their venture. Mother Juice was officially funded this week and Schlemme and Fitzgerald are currently scouring eBay and Craigslist for a truck.

“[Mother Juice] seemed to lend itself to Kickstarter. Crowd funding is really cool. People can vote with their dollars,” Fitzgerald said.

In the meantime, they will be making some appearances around town to drum up interest for their business. Schlemme and Fitzgerald will be taking Mother Juice to the Swirl & Slice market tonight and next Thursday from 5-8 in Union Square. If you go, you can sample some of their creations (made in a local commercial kitchen) and welcome Mother Juice to the local food scene.

As for the Mother Juice name, Fitzgerald came up with it after she and Schlemme had been going back and forth trying to decide what to call their venture.

“It does embody the ethos of what we’re going for,” Schlemme said. “Mother Earth, we’re female owners and Mother Goose is from Boston.”

They’ve been working hard to come up with innovative concoctions by throwing unexpected ingredients into their juices. Expect to see creations using things like basil and fennel in addition to more typical juice ingredients like greens, carrots, watermelon and cucumber. Much of the produce will come from local farms and Schlemme and Fitzgerald plan to highlight where the ingredients originated.

“We do creative takes on juices,” Schlemme said. “We have a lot of fun devising new recipes.”

Local, organic produce can be pricey, but Schlemme and Fitzgerald think their venture will benefit from the economies of scale that will come from taking the juicing out of their kitchens and onto the streets of Boston.

“Fresh juice is expensive, but we’re trying to make this as cost-effective as possible,” Fitzgerald said.

Fitzgerald and Schlemme want to highlight the health effects of juicing, so they plan to explain the benefits of the ingredients to Mother Juice customers. Fitzgerald said that cucumber and fennel are calming, while watermelon is a diuretic and greens and carrots contain many essential vitamins. To ensure that the most vitamins are extracted from the produce, Schlemme and Fitzgerald just invested in a high-end juicer that works at a lower speed, creating less friction and heat (which break down nutrients).

“Juice is an easy way to get those vitamins,” Fitzgerald said. “The structure hasn’t been broken down, so you absorb it.”

Fitzgerald has been juicing for years and credits juices to her grandmother’s long, energetic life.

“My grandmother’s a big juicer, she has been since the ’70s and she’s still zipping around,” Fitzgerald said. “So I thought I should start sipping from the fountain of youth.”

Schlemme is newer to juicing, but she has a long history of vegan cooking and baking under her belt. She makes vegan coconut ice cream at home and will be using it in the smoothies Mother Juice creates. In addition to liquid menu items, Mother Juice will sell snacks like kale chips and vegan baked goods, many made with the leftover juice pulp.

Schlemme and Fitzgerald exude passion and are very excited to bring their juices, smoothies and snacks to the Boston community. If all goes well, they hope to make some appearances at farmers markets in the area through the fall and to have the truck up and running as soon as possible.

Mother Juice
Find them at the Swirl & Slice market tonight and next week (August 9 and 16) from 5 p.m.-8 p.m. in Union Square
Soon to be around town in their food truck with juices, smoothies and snacks