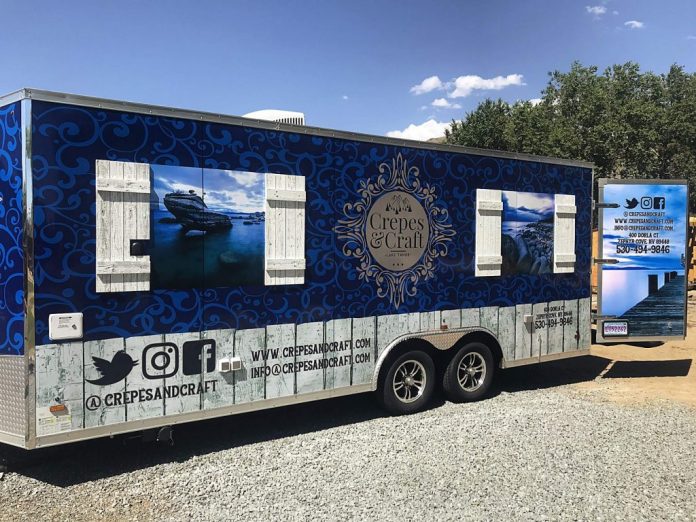 With a little push from the global pandemic and support from the local community, they opened Crepes & Craft on Labor Day Weekend.

While the idea was conceptualized before the pandemic hit, the food truck is suitable during restrictions due to the coronavirus.

Founder and co-owner, Nick Giordano has spent over a decade working in the bar and restaurant industry. Giordano previously was the Bar Manager and Master Mixologist for The Loft in the Heavenly Village. He was even nominated for “Best Bartender” for the Best of Tahoe awards. However, he has now shifted gears.

After a trip to Portland, Ore., Giordano fell in love with the concept of food trucks. This experience created his dream to someday have his own. In March 2019, when the South Lake Tahoe ordinance went into effect to allow food trucks, Giordano says his ears perked up.

Giordano’s friend Eric Mutell was inspired to have something of his own after also working in the service industry for several years. The duo met in 2010 at the lake, connecting over their passion for the outdoors and the New England Patriots.

Mutell’s years of culinary experience and a passion for creating good food inspired him to jump on board. Many years prior to Crepes & Craft, Mutell earned the position of kitchen manager at the age of 19.

When Giordano and his wife traveled to Europe, particularly southern France, he learned that crepes are not only a sweet treat but can also be a served savory with a variety of creative toppings. Ironically, Mutell grew up in Vermont, not far from Quebec, Canada where crepes were a popular meal. He even referred to crepes as the “French quesadilla.”

Mutell and Giordano decided to share their love of crepes with the local community of South Lake Tahoe.

In January, the idea started coming into fruition and by February they had purchased a trailer. By March, the pandemic was in full swing and Giordano was laid off from his full time job. Giordano said that for a moment they questioned if it was really the right time to try and open a new business during a pandemic and wondered if they should hold off for a while.

“We decided to turn lemons into lemonade and to continue moving forward with the project,” Giordano said.

Now, six months into the making of Crepes & Crafts, they have all their permits and operate in the outside beer garden of South Lake Tahoe Brewing Company.

El Dorado County on Tuesday moved from the “substantial” or red tier to the less restrictive “Moderate” or orange tier. In the red tier meaning bars are not allowed to open that don’t serve food,

For bars that have a beer garden this creates an option if mobile food trucks are on-site during operation hours, creating a demand for mobile kitchens. Crepes & Craft currently has a partnership with South Lake Tahoe Brewing Company until November and the truck will be on site Thursday through Monday. Crepes & Craft and South Lake Tahoe Brewery are helping each other’s businesses during challenging times.

In the near future, Crepes & Craft plans to operate like a traditional food truck by moving around to different places. They also are offering an online ordering system for pickup and delivery through DoorDash.

Giordano says he feels for all the local restaurants that have been impacted by the pandemic. He says that while restaurants have always had to learn to adapt and overcome, this situation has been particularly challenging.

“All of our lives have been quite a rollercoaster in 2020,” said Giordano. “People are looking to get out and reestablish some sense of normalcy. That sentiment has really helped us through our first couple weeks.”

He said that even given the circumstances their expectations were exceeded since opening.

“It is out of this world,” he said. His other favorite is the sweet Harambe which includes bananas, cinnamon french toast bites, chocolate hazelnut spread and a chocolate drizzle.

But it’s not only crepes they serve, they also have signature sliders, craft sandwiches and soup.

Giordano and Mutell are running the show by themselves for now from everything from prepping, cleaning and daily operations.

“It’s really fun to be working and building something with your best friend,” said Giordano. “We are working together to serve our community.”