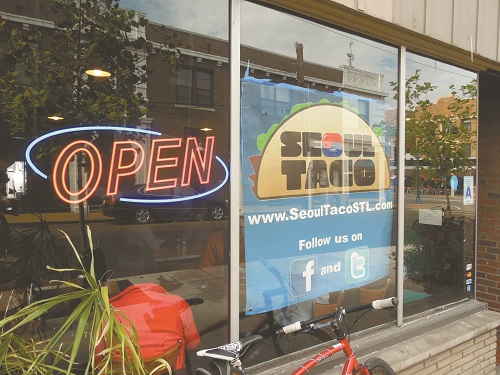 Korean-Mexican fusion enthusiasts no longer have to buy their meals from a vendor on four wheels.

The store, which held a soft opening during lunch hours Saturday, will now be open daily from 11 a.m. to 10 p.m.

Seoul Taco co-founders David Choi and Andy Heck have been operating out of their truck since July 2011, when they quit their jobs and Choi sold his car to buy a used food truck from New Jersey.

In response to growing demand they’ve seen during their year in business, the partners began looking into expansion opportunities, including the purchase of a second truck.

When the two high school friends and St. Louis natives found their current Melville storefront, they acted fast, signing the lease this past July.

“Our demographic for our truck was mostly college-age students or young professionals, you know. So, we thought it would be a perfect fit, just being down on Melville, just down the street from Wash. U.,” Choi said.

Choi, who learned to cook Korean barbeque from his mother and grandmother growing up, was inspired to start the food truck when he saw Korean taco food trucks in other cities.

“I saw tacos, Korean tacos, every city I went to. From there, I was like, St. Louis really needs one,” Choi said.

He said that Seoul Taco’s focus on quality sets it apart from food trucks with similar menus in other cities.

“We really want our barbeque to shine, so we spend a lot of time in the marination process. And also, we don’t compromise on the quality of the meat as well. A lot of the meats and ingredients that we use…you don’t try to take any shortcuts with it.”

Choi noted the advantages of a small storefront over the truck.

“We wanted to be as efficient as possible. With the truck, you know, we bought it used, so we were sort of dealt with what we were given. This time, me and Andy [Heck], we customized everything. Especially being in operation for a year, you know what needs to be in place,” he said.

Despite the expansion, the food truck will remain an integral part of Seoul Taco’s business, and will continue making visits to Washington University’s Catholic Student Center each Thursday.

“We understand that students are busy…if they want a quick lunch, you know, they can go to the truck at the Catholic Student Center on Forsyth. So we understand that,” Choi said.

Though Choi has high hopes for the small storefront, he acknowledged his team still has learning and tweaking to do.

“It’s been super busy. There’s some kinks we’re trying to work out still. Like any other business, it’s the first day out, you just learn a whole lot. But it’s been going real smooth.”

Co-founder, Andy Heck, is excited about the expansion.

“Me and David are really looking forward to becoming billionaires, hopefully. No, I mean, honestly, we’re just trying to keep the truck going, try and run the store, and try and just take on as much as we can. I mean, we love doing this. Me and David have been friends for a long time…The idea that we have that we’ve come up with is a good idea, so we’re just trying to see how far we can go with this, doing it with people we’ve been friends with for a while,” he said.

Heck said he hopes to eventually expand the menu to include items that have wider appeal, like sandwiches

“As far as the future goes, we’re going to try to just take it day by day. Just when the time is right, it just seemed right to move into a store,” Heck said.

Junior Kristen Faddis, who has anticipated the event for a while, was pleased with her experience.

“I’ve kind of been looking forward to it for a while and I really enjoyed the fusion of Korean and tacos. And I think they definitely made the right decision of coming right near Wash. U. I can see it really being prosperous,” she said. “I definitely feel like I’ll be eating there at least once a week.”