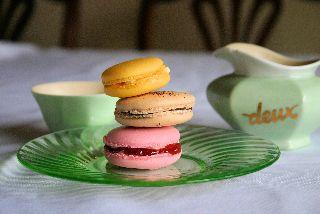 The birth of Louisa Smith’s mobile, gluten-free bakery began with the $1,000 purchase of a vintage camping trailer: a 10-foot long, 1961 Ionia-a-Home – a brand so tiny, she said, it’s virtually unknown.

The previous owners of the trailer, a young couple from Hollidaysburg, are foodies. The husband is a chef; the wife shares his appreciation for wholesome, local food. So when Smith, a graduate of State High and Penn State, contacted the couple through eBay and explained her intention to turn the trailer into a mobile kitchen for her artisanal baked goods and ice cream business – “Bell & Whistle”– the trailer’s new life seemed destined.

After Smith, 28, hooked the trailer to her station wagon and drove it back to State College on what she said was the “windiest day of the year,” she faced a rather large obstacle: affording the commercial kitchen appliances and the necessary repairs/upgrades for the trailer. Rather than approaching a bank, she took the 21st-century approach to raising money and broadcast her plea online through a site called Kickstarter.com.

Kickstarter leverages the reach of the Internet by turning consumers into small-time “angel” investors. Smith’s particular project set – and surpassed – a goal of $6,500. To attract attention, she created a short video (“Help me quit my day job,” she implored) and sent links to gluten-free bloggers. After learning that Neil Gaiman, the New York Times bestselling author of “American Gods,” promoted Kickstarter projects on his Twitter feed, she sent him a note. He retweeted it to his more than 1 million followers, which resulted in several donations.

Instead of a share of the profits, Kickstarter backers receive various rewards. Six backers pledged at least $1 and received a mention on the Bell & Whistle website as a sponsor. Twenty-eight backers pledged $25 each, earning one-dozen cookies of their choice, along with a limited edition “Gluten Free is Good for Me!” wartime propaganda-style poster.

Jackson Spielvogel, a Penn State associate professor emeritus, gave $500. He gets his own ice cream flavor, which he’s decided will be “Jackson’s Jubilee”– coconut, with brandied cherries. (All the ice cream flavors will be gluten-free, but not vegan; she’ll have sorbets for her vegan customers.) The biggest donation came from a high school friend, who gave $1,000 as an anniversary gift for his wife, who has decided to name her ice cream flavor after her cat. Smith is donating a portion of the proceeds from the sale of the flavor to a nonprofit of the couple’s choice, most likely an animal shelter.

In all, a total of 106 backers provided financial support, and one month ago their collective $6,886 (minus the $500 Kickstarter collects in fees) showed up in Smith’s bank account. It’s all a bit surreal, but make no mistake: Smith isn’t treating the largesse like Monopoly money. She recently spent $2,000 at a restaurant supply store, a purchase that she described as “slightly terrifying.”

When Smith and then-partner Becky Savage opened a booth at the State College farmers market in 2010, they started with macarons (not to be confused with the macaroon), a French cream-filled confectionery made with egg whites, icing sugar, granulated sugar and almond meal. Smith chose macarons because she likes them herself; they just happen to be gluten-free. At the time, Smith was baking them out of Webster’s on Aaron – owner Elaine Meder-Wilgus generously donated her kitchen – and customers at the café and the farmers market reported that they were buying them because they were gluten-free.

“I worried that someone would have some kind of life-threatening reaction to something I made,” she said. When she learned Webster’s on Aaron was closing, she accelerated plans to launch an independent gluten-free kitchen.

I first discovered Smith and her gluten-free goods at last year’s farmers market. I purchased a few of her macarons (pictured above), and couldn’t believe my taste buds. They easily surpassed the first hurdle of gluten-free goods by tasting like something you’d actually want to eat again. Even more impressive, they were just as good as the wheat-based cookies I’ve purchased at the market.

Smith thinks she has a competitive edge. Because she isn’t on a gluten-free diet herself, she’s still able to compare her goodies to those made the traditional way. “I’ve had [gluten-free items] that don’t really taste like the real thing and that’s probably because they were made by people who haven’t had the real thing in a long time,” she says.

When Smith makes her farmers market debut this summer (Savage left the partnership in November), she’s planning on selling cookies, whoopee pies, muffins and soft pretzels. The idea for that last item originated from a Facebook post in which Smith asked her gluten-adverse customers to name the food they missed the most. When several people mentioned soft pretzels, she headed to the test kitchen. The result is a pretzel made from teff flour, with ground flax seed and white chia seeds dissolved in water for texture.

Unlike a lot of gluten-free products on the market, the pretzels are completely devoid of artificial ingredients. In fact, with the exception of Xantham gum and food coloring, all of her products are made with ingredients that actually qualify as food.

Smith hopes to be up and running by mid-June, selling at the Tuesday State College farmers market and the Saturday market on North Atherton Street. In the meantime, she’s working on a worthy cause: an online hub for the town’s three markets that includes a newsletter and a Facebook page.

As for that trailer, it’s currently at Fast Track Trailers in Spring Mills getting electrical work and a new door. Next steps? Replacing the stick-on tile floor with a seamless vinyl one and installing a Vollrath half-size countertop convection oven – a $779 item that just a year ago seemed as realistic as a delicious gluten-free hot pretzel.