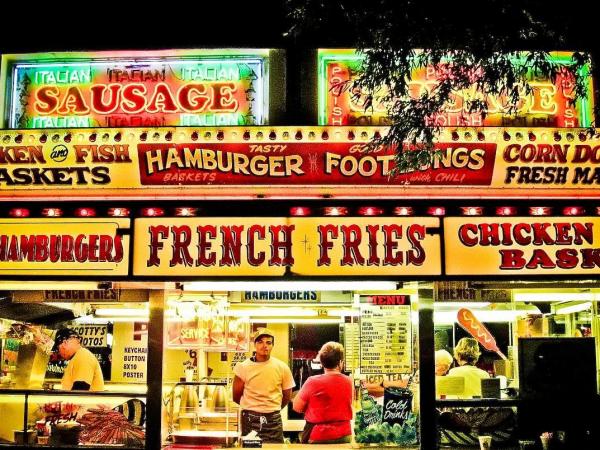 State fairs have been a celebration of a state’s agricultural bounty and a competition for bragging rights among America’s pie bakers and quilt makers for more than 150 years. Fairs have evolved quite a bit, but food still plays a prominent role, at judges’ tables as well as the multitude of food stands and food trucks spread around the fairgrounds.

Many of the comestibles are similar (and fried) because some purveyors travel fair to fair. There’s often sweet corn (fresh from local harvests), a vareity of eats on a stick and the usual odd bits: Meat man parfaits? Deep-fried Twinkies? There are, of course, iconic items (at least according to fair officials we surveyed) that have been filling bellies for decades.

Minnesota State Fair: Pronto Pup, like a corn dog but its batter is more pancake than corn, has been served since 1947. But in the land of 10,000 lakes, a walleye on a stick (introduced in 1995) is also worth tracking down. Aug. 25-Sept. 5, St. Paul; mnstatefair.org

St. George, UT: Truck Serves Up Corn Dogs, Even in the Freezing Winter

Plymouth, MA: Food Trucks are Born in this Plymouth warehouse