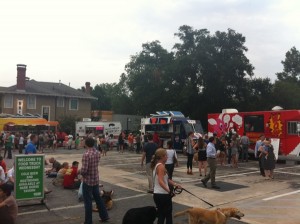 The Institute for Justice filed a lawsuit against the city of Atlanta this morning on behalf of clients Larry Miller and Stanley Hambrick for what they believe is the city’s violation of Miller and Hambrick’s constitutional right to earn a living by handing over all public vending to a single company. Ernie Suggs of the AJC reported on the story following this morning’s press conference announcing the suit.

In 2009, the city of Atlanta awarded a contract for the management of all public property vending to General Growth, a multi-billion dollar shopping mall operator that owns Cumberland, Perimeter, and North Point malls to name a few. The contract allows GGP to build kiosks specifically designated for street vending on public property, which is then leased out to potential vendors. The lawsuit claims that this is not only a monopoly, but that it interferes with entrepreneurs’ ability to conduct successful businesses.

Though the vendors in this particular lawsuit operate stands primarily selling Braves merchandise outside of Turner field, the Institute for Justice sees further implications that could positively affect our blossoming food truck and street food vendor industry.

Rob Frommer, the lead attorney in the case, explained to me in a phone interview that “The purpose of the lawsuit is to vindicate a part of the Georgia constitution that states that everyone has the right to earn an honest living. This applies to vendors selling Braves merchandise and food vendors as well.”

Frommer believes that a win in this case will hopefully make Atlanta reevaluate how it treats its street vendors.

“The food trucks in Atlanta face difficulty in the confusion over the laws that regulate the industry. It isn’t clear to vendors – or the city for that matter – if operation on private or public property would violate the contract with GGP,” says Frommer, “A win here should get clarification on the law, so it should help everybody.”

This lawsuit against Atlanta is part of a larger nationwide effort put forth by the Institute for Justice to change laws restricting the ability of street vendors to operate in major cities. Atlanta has some of the strictest anti-street vending laws in the country. For example, persons vending on private property aren’t technically allowed to operate within 1,500 feet of a permanent business selling the same or similar products. This 1,500 foot restriction is the largest of its kind in the nation.

What do you think? Could this be a step in the right direction for the food truck industry in Atlanta?

We will update this story as it progresses. For now, please see the video below provided by the Institute for Justice regarding the lawsuit and the state of street vending in Atlanta.