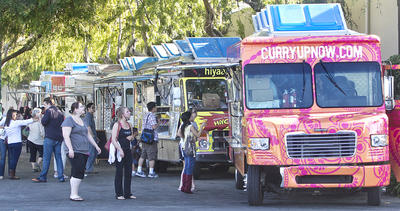 New guidelines are in place for any food truck vendors that have Sunnyvale set on their GPS units.

Due to the growing popularity of food trucks in cities across the nation, Sunnyvale decided to set up parameters to minimize any safety or traffic hazards that may come with the food truck craze.

The city council on Dec. 18 voted unanimously to set up a few key guidelines. The ordinance covers required distances from hydrants, driveways, fire lanes and crosswalks; hours of operation; maintenance of trash receptacles and cleanliness of the surrounding area; and prohibition of amplified speech or music.

Food vendors will be required to display a Sunnyvale business license and must be able to provide upon request licenses and permits from other agencies–such as the Santa Clara County Department of Environmental Health–that ensure food safety and sanitation. The city can take action if a mobile vendor is causing any public nuisance as well.

Dan Hugo, acting director of the Bay Area Mobile Food Vendors Association, voiced concerns about some of the requirements at the Dec. 18 meeting.

Trucks can park on private property for no more than four hours per day, and no more than three vendors are permitted at a time. If property owners want to exceed either of these limits, they would have to get a miscellaneous plan permit.

Hugo was concerned that companies such as Juniper Networks and SIMCO, which share a building, might have difficulty tracking down the property owner. Some vendors may also wish to work both a breakfast and lunch hour, which would exceed the four-hour limit.

Still, Hugo said he was pleased with the ordinance overall. “The Sunnyvale staff did a solid job of reaching out to everybody,” he said. “We hope similar studies in the Bay Area will be conducted so thoroughly.”

City staff said it will continuously evaluate the ordinance and is open to explore any future changes, but for the time being wanted to get overall guidelines in place.

In the last five years, the Sunnyvale Department of Public Safety has received about 10 complaints regarding food truck activities. The majority have been from brick-and-mortar restaurant owners, represented by Kirk Vartan of A Slice of New York at the Dec. 18 meeting.

Vartan echoed concerns that food trucks have an unfair economic advantage because they do not pay property taxes or rent space, and they are exempt from land use or building permits, utility bills and other traditional restaurant expenses.

Sunnyvale DPS has also received complaints from residents about late-night noise and other safety concerns involving food trucks on commercially zoned property. The majority of the complaints were associated with noise from nightclubs and the late-night crowds, with some saying food truck service was perpetuating loitering and noise.

The ordinance addresses such concerns by creating a balance between regulations on public streets and private property, according to city staff. Additionally, requiring a permit in certain situations provides a basis for enforcing food trucks that create public safety problems.