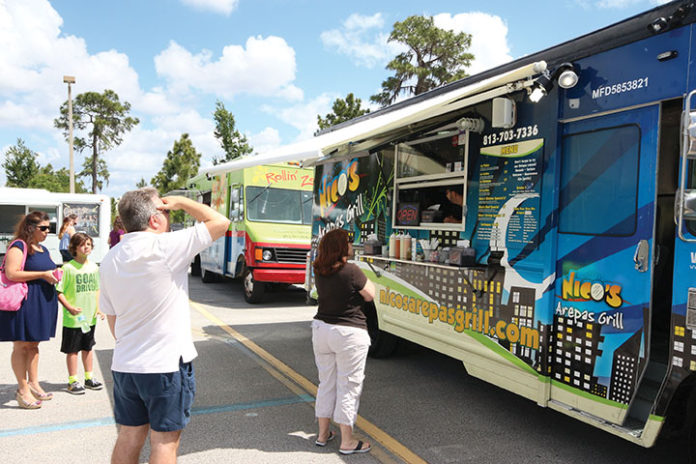 Smoke rises along Bruce B. Downs (BBD) Blvd. in New Tampa from the Paul R. Wharton High parking lot. The haze floats above the area, carrying with it scents not usually associated with a fire. In fact, they smell downright delicious. The source? Wharton’s first food truck rally, “Food Trucks Fighting Hunger,” which was held on April 13.

Chef Edward Bujarski, director of Wharton’s Culinary Arts program for the past 13 years, says that by the end of the hot Sunday, more than 750 people had cruised through the Wharton Driver’s Ed lot, where the event was held. The rally was a collaboration between the school’s FCCLA (Future Career & Community Leaders of America) club and the Culinary Arts program.

Jim Mcelvenny — a New Tampa resident and 2004 Wharton graduate who now runs Daily Grinders, a gourmet food truck that feeds residents all across Tampa Bay — decided to organize a rally at his alma mater to help expose the area to something a little different than all of the big-chain restaurants, which make up most of the area’s dining market.

“You don’t find a whole lot of authentic, made-from-scratch food up here (in New Tampa),” says Mcelvenny, who was a student in the Culinary Arts program when he attended Wharton.

In fact, he says, at one point, he was spending up to six periods of the school day in Bujarski’s class.

Mcelvenny has been running Daily Grinders with fiancé Ashley Poettker for the past six months. The couple met while working at the Wesley Chapel Bonefish Grill on BBD.

“We’ve gotten lots of good feedback (from diners) so far,” Poettker says. “It’s fun being able to move around. One day we’ll be doing lunch outside of a business and the next day we’ll be at a music festival.”

In addition to food trucks Daily Grinders, Rollin’ Zoinks, Nico’s Arepas, Hot Box’d and I Wanna Wok, Wharton culinary students baked desserts that also were sold at the rally. A percentage of proceeds from the trucks and the dessert sales totalled $400 and were donated to “One Chef Can 86 Hunger,” a culinary charity started by Wharton grad Max Hardy. Unfortunately, Hardy was not able to attend, as his business is based out of New York. Hardy actually works full-time as the private chef for the New York Knicks’ Amar’e Stoudemire.

According to the charity’s website, “One Chef” is a not-for-profit organization that, “works toward raising awareness of the hunger epidemic in America. The Foundation is also committed to bringing culinary arts to inner city communities through its culinary programs and scholarships to the next generation of young chefs.”

Bujarski says that the rally also was an opportunity to educate his culinary students about the food truck industry, a restaurant trend that has steadily grown in popularity in recent years. It has blossomed so much, in fact, that Tampa Mayor Bob Buckhorn and the Downtown Partnership host a monthly food truck rally in downtown Tampa. Our area also recently set the Guinness World Record for largest food truck rally on March 29, when 121 trucks gathered at the Florida State Fairgrounds.

“This rally gives the students a chance to learn about this niche in the restaurant industry,” Bujarski explains. “At first, I think (the students) thought the trucks were a little tight and cramped, but they also saw that they can be a fun environment to work in. Once they see how the community embraces food trucks, they really seem to enjoy it.”

Poettker says that the food truck community is just like a family.

“Before the event, we’ll all show up, see who came and give each other hugs,” she explains. “Afterward, we eat each other’s food.”

Wharton senior Kristy Rosica, who helped sell baked goods at the rally with fellow students, says that the culinary program is what she’ll miss most about high school when she starts at the University of Florida in Gainesville in the fall. She has been in the 300-student program since her freshman year. When she heard that the program was hosting a food truck rally, she says that she didn’t really know what to expect.

“I didn’t expect so many trucks,” she says. “It was one thing to hear about it, but it was tough to picture what the rally would look like.”

Rosica says that she is majoring in nutrition science, but that the food trucks are appealing as a potential culinary career.

“It seems like a cool job,” she says. “You get to drive around and do what you love every day.”

Wharton’s culinary students even run their own restaurant — called Chez Paul — during lunch hours on most Fridays, with a menu based on their weekly culinary lesson. “The lesson is always based on technical skill as well as a cultural, geographic and economic lesson centered around the theme of the week,” Bujarski explains.

Chez Paul is open most Fridays from 10:30 a.m. – 12:30 p.m. for Wharton faculty and staff, as well as the community. The menu is published to the school’s website on Wednesday for that Friday. Guests from the community are welcome to enjoy the three-course menu for $7. Reservations are not required, but suggested for groups of more than four, as seating is limited.