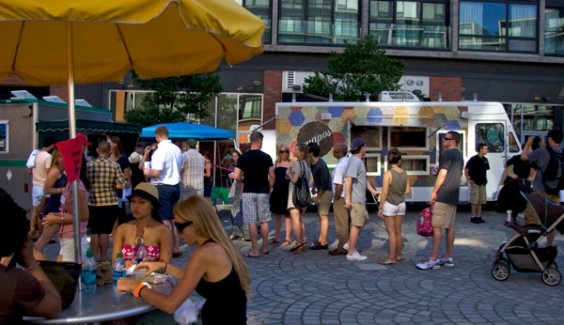 After a stunning debut, the Vendy Awards are returning to Philadelphia. On July 28th, at The Lot @39th and Market, we’ll determine the best street food vendor in Philadelphia while raising money for The Food Trust.

Each ticket is also a tax-deductible donation.

WE EXPECT TO SELL OUT. BUY YOUR TICKET IN ADVANCE!

What are the Vendy Awards?

The Vendys are a yearly street food cook-off that, since 2005, has determined the best street chef in NYC. It has become one of the greatest food events in New York. Mario Batali called the Vendys “the Oscars of food for the real New York.” Now, they are coming to Philly!

The point is to celebrate the street vendors who serve us every day, and who bring so much culinary and cultural life to our streets and public spaces. Also, to raise money for The Food Trust, a non-profit organization that is dedicated to building a strong local and healthy food economy.

How does it work?

Simple enough. Until June 28th, we’ll take public nominations to determine who will be the lucky 8-10 vendors invited to compete against each other for street food glory. At the event, we’ll have a team of distinguished judges score the finalists and decide who get the coveted Vendy Cup. The general public can also buy tickets to the event, to enjoy the vendors’ food as well as beer, wine and general festiveness.

Saturday, July 28th, 2012 from 3pm to 7pm at The Lot @ 39th and Market in University District. You can find directions HERE (link to google)

Which vendors are eligible for nomination?

Anyone who sells food in the streets, sidewalks or public spaces, anywhere in Philadelphia. Finalists will be determined by who gets the most nominations – however we will make sure that the finalists represent the wondrous diversity of Philadelphia street food.

How will you avoid a street food catastrophe?

We’ve been running this event for a long time, and no one has ever gone home hungry or thirsty. We’ll stop selling tickets when we reach our limit. Because vendors can only work so fast, you will have to stand in line, but that is where you make new friends. One couple even got married after meeting in line at the Vendys! Results may vary, however.

What does my ticket get me?

Admission to the event, where you’ll get to eat food from all the finalists while enjoying your fill of beer. And, since the Vendy Awards Philadelphia are a benefit event for a non-profit organization, your ticket is tax-deductible.

Can I buy my ticket later or at the door?

Maybe, but tickets are going fast. And, if there are still any available, same-day tickets will go for $60. Best buy yours now to be safe and save some money.

Are kids welcome? Do they need tickets?

We love kids and kids love street food. Children 8 and under don’t need a ticket. Otherwise, they do.

I’m a member of the press. How do I get a press pass or arrange to interview the organizers or individual vendors?

Do not call, but send an email to at Emma@berlinrosen.com. Please include your contact info and the name of your publication. Press passes are limited.