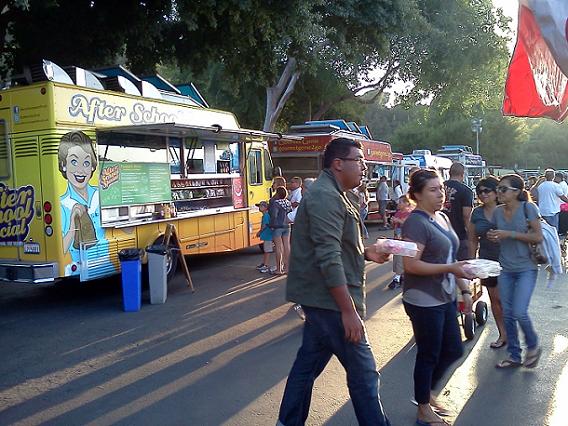 By Tricia Duryee | ALL THINKG D

The food truck revolution is in full swing, with chefs on the roll, serving up everything from your basic panini to an artisanal pizza from a 20-foot shipping container equipped with a roaring wood fire.

Based on one estimate, there are three million food trucks and more than five million food carts in the U.S. A reality-TV show called “The Great Food Truck Race” depicts the drama in setting up shop, and the challenges of making a profit.

So it’s no wonder there’s now an iPad-based solution made specifically for the four-wheeled purveyors.

What’s special about this version is that it allows the trucks to accept orders and charge credit cards with little to no wiring, so kitchen crews in cramped quarters don’t accidentally stumble over or chop their lifeline to the Internet. It also enables them to continue taking orders, even when their Internet connection goes down — because that can happen when moving from one street corner to the next.

“Before, you’d have a router and cabling all around; it was one big mess,” said Revel Systems’ co-founder and CTO Chris Ciabarra. “If you want a printer and a display, where do all the cables go?”

Additionally, the software enables food truck owners to update their location, or offer specials via Twitter.

What’s different about this iPad solution from others, like Square, is that it’s focused on the enterprise customer, Ciabarra said.

As traditional brick-and-mortar restaurants like Popeye’s and In-N-Out Burger experiment with food trucks, they want a point-of-sales solutions that isn’t a one-off, but is able to support franchises, he said. ”The food truck industry is booming. All the brands are trying it out.”

Revel also allows merchants to integrate any payment solutions or rewards and gift card programs, including traditional providers like Visa, MasterCard and American Express, and also upstarts like LevelUp. The software also easily tracks what items are selling well, as well as the things that are the most profitable, so truck owners know which items on the menu to emphasize.

Revel, which was founded in September 2010, launched its first product in beta last summer, and has raised $3.7 million in capital.

The company is charging food trucks $2,000 for the package, which includes the iPad, the cash drawer, a printer, the software and the cabling. Each Internet-connected iPad also costs $30 a month. The enterprise version, which has additional features, costs $3,300, and $100 a month.

That’s a lot of tacos.