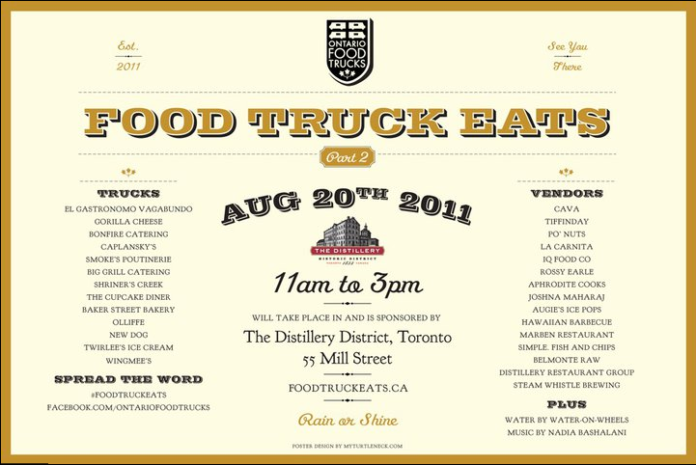 The lack of gourmet food trucks has long been a thorn in Toronto’s renowned culinary side. However, if last Saturday’s inaugural Food Truck Eats festival was any indication, the wheels to change this are already turning.

As we were helping at one of the stands, we were forced to rely on the kind donations (many, many thanks to the lady who brought us Marben’s insanely delicious chocolate ice cream sandwich) and reports of festival-goers on the front lines (emphasis on lines!). Notable standouts included the steamed pork buns from El Gastronomo, creamy kulfi with fresh Ontario strawberries from Joshana Maharaj, wood fired pizzas from Bonfire Grill, lobster brioche rolls from Simple Fish and
Chips, and the smoked chicken croquettes (decadently and accurately described as “deep fried chicken pot pie”) from Geoff Hopgood, the former criminally delicious mastermind behind the Hoof Café. Hungry yet?

The next event, which organizer Suresh Doss of Spotlight Toronto promises will feature more vendors (including Toronto’s Caplansky Deli) and thankfully, more portions, will take place on Saturday, August 20th. Our advice? Plan to show up early
and hungry.

More information on the upcoming Food Truck Eats event can be found here.