There is a church near Bloor and Church Streets. Across the road sits an insurance building. And outside of that, you can often find a food truck.

Allen Tan’s Me.n.u. truck was there Thursday — Toronto’s first day under looser street food regulations. They now allow licensed mobile eateries to park up to 30 metres away from brick-and-mortar restaurants, down from 50.

That 20-metre gap means different things to different people. It could harm established restaurants, according to one restaurant owner. One customer, munching on pulled pork from Me.n.u and considering the distance purely in steps walked, said it wouldn’t mean anything at all.

To Tan, who founded Me.n.u last year, it could bring more sales and recognition — and more intersections like Bloor and Church, where one night in late April, he took a tape measurer, walked down the block and counted every metre to the nearest restaurant.

“If you loosen the restrictions, it’ll give you more opportunities,” Tan said. “It means I have more work to do. Every night now, I should be going out to find new spots that are plausible or profitable.”

Several Me.n.u customers, lingering on the sidewalk after placing their order Thursday, said they support food trucks staking their claim in Toronto’s food scene. Most were unaware of the new rules, passed 43-1 by City Council last week. (Ward 7 councillor Giorgio Mammoliti cast the only vote against.)

The real impact will be felt in the coming weeks — as trucks identify prime spots within 30 metres of restaurants — and into next year, according to Blazin Cajun founder Sevil Rahnama.

She launched her business last summer, and said others could be more willing to do so under relaxed regulations.

“They have the chance, this way, to have their own business and their own kitchen to make their passion and the food that they’re passionate about and serve it to people — with a way lower investment than a restaurant and, I would say, a higher chance of succeeding,” Rahnama said.

That’s precisely the fear of some restaurant owners, who say they’ve invested considerable funds into their permanent locations.

I think I appreciate what Toronto’s trying to do with all these different things. I just wish it didn’t have to affect other businesses.

Edward Kakish, the owner of Sunset Grill on Bloor St. — roughly 200 metres away from food truck parking — said he isn’t keen on trucks intervening in brick and mortar-heavy neighbourhoods.

“I don’t mind it if they’re not near the restaurant,” Kakish said. “If they’re at Queen’s Park, it doesn’t affect anybody, because there are no restaurants there. Now, they’re getting more mobile, so that’s where it affects us.”

Around the corner on Church St., Spirits Bar and Grill general manager Edi Chungandro said food trucks haven’t detracted from his business yet — but like Rahnama, he’s anticipating more will hit the streets soon.

“Our restaurant can’t move somewhere else, or go and block someone else’s restaurant. They can move anywhere they like,” Chungandro said. “I think I appreciate what Toronto’s trying to do with all these different things. I just wish it didn’t have to affect other businesses.”

Variety in lunch options was on the mind of bystanders outside Me.n.u. After ordering rice balls and a taco, Colette Snyder said cutting the mandated distance from 50 metres to 30 will bolster competition.

“I think a good restaurant shouldn’t be worried about losing business to a food truck,” she said. “If they’re a good restaurant, people are still going to go there. It’s giving people more choice.”

The closest restaurant to the Bloor St. parking spot is the Irish pub Fionn MacCool’s, where the front patio sits in direct eyesight of whichever truck is operating. But general manager Andrew Groves said they haven’t caused him problems. 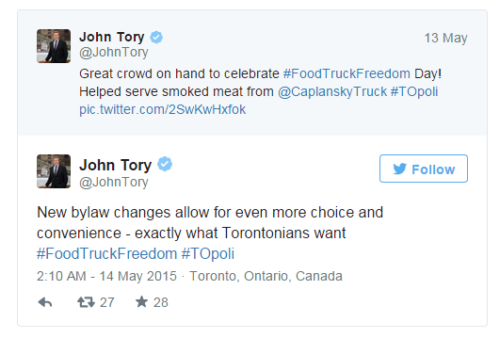 “I think food trucks have a tough go as it is, especially considering that there are so many restaurants,” Groves said. “I don’t think you’re going to get that many closer to us or the other restaurants in the area. Had they dropped (the mandated distance) by more, I think it’d be a little more of a concern.”

Tan, meanwhile, would like to see even further change. In brainstorming sessions with City Council before the new rules were put forth, he said, he proposed something else: letting trucks park wherever they’d like in the city for a month or two, and assessing matters from there.

“That would be really cool,” he said. “Realistically, the restaurant industry has so much money and so much weight to pull that they probably wouldn’t allow something like that.”