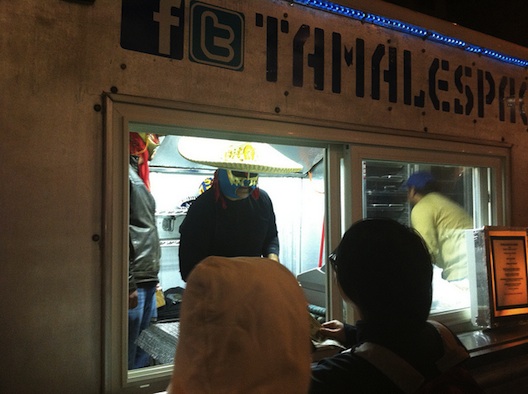 We sure hope Rahm Emanuel legalizes food trucks after he is sworn in because every time we turn around there is another addition to the fleet. The newest of the bunch is the Traveling Burrito, which started delivering healthy burritos at the end of February to patrons in the loop. The team behind this truck used to serve up burritos in Mexican Village, so they are bound to be pretty authentic.

$5 will get you a burrito, chips and a can of soda. For those who just want a taste, mini-burritos are available, two for $2.50. There are four hot and healthy wraps to choose from: Asada,Veggie, Chicken or Pork-Pastor. They may throw in a special of the day to mix it up. Follow @pepitopepper for their whereabouts, Spanish lessons, and random burrito quotes.

Another new truck rolling on the scene is Tamalli Space Charros otherwise known as the Tamale Spaceship. Their image is inspired by Mexico’s “stridentist” movement (the 1920s avant-garde and cultural change) , as well as Mexican wrestling and sci-fi films. Delivering food wearing Mexican wrestling masks since January, the Tamale Spaceship brings nutritious and delicious “tamales de mole” and “space” guacamole to Chicago. Their menu and locations rotate weekly and the latest can be found on their website. You can also follow them on twitter @tamalespaceship to see where they are and figure out what “stridentist” means.

If you want to try both of these food trucks, but have limited time, no worries. The Traveling Burrito and the Tamale Spaceship sometimes like to travel together, referring to themselves as the Food Court Caravan. Sounds pretty delicious to us.