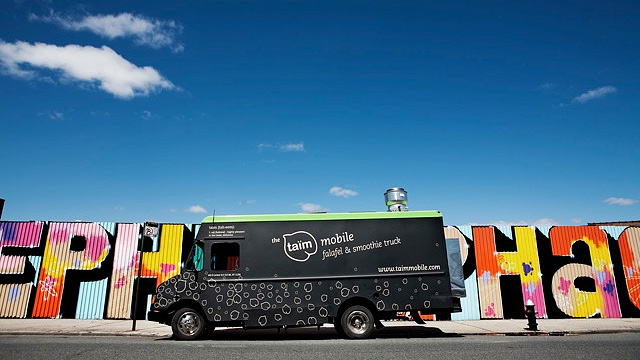 In the cutthroat market for Trend Stories Centered in Williamsburg, Brooklyn, it pays to be the early bird. Not only does the neighborhood, populated by desperately trend-hungry fauxhemians, constantly cycle through the very latest microtrends; but its status as America’s prototypical “hip neighborhood” means that even the merest hint of a new Williamsburg microtrend is almost immediately packaged and distributed by the equally trend-hungry media, to be feasted upon by the voyeuristic, trend-hungry public.

In this hypertrendspotting environment, you have to be snappy. Once a Williamsburg trend hits the New York Times, it’s only good for laughing at the cluelessness of Manhattanites. The real prize is catching a possible trend in its early stages, before it’s been all picked over. You have to be able to instantly spot and exploit stories like this, in today’s Brooklyn Paper: “West Bank proxy battle seen in falafel war on Bedford Ave.”

The basis of the story is this: a falafel truck has set up shop on Bedford Ave, where it’s competing with the popular Oasis falafel restaurant, also on Bedford Ave. The fact that this tissue-thin premise has already been conflated into a “West Bank proxy battle” by the lowly Brooklyn Paper indicates just how competitive the Williamsburg trend game is—the trend-packaging has already occurred, even though the story has yet to travel very far at all up the media food chain. Still, the fact that the FALAFEL WAR is occurring on HIP Bedford Avenue is promising. And there are indications that the story still has unexploited angles:

“In America, everyone can live in harmony – but Oasis’ prices are incredible,” said Van Leeuwen [himself a fancy hipster ice cream vendor!-Ed.]. “For $3, I feel like I’m robbing them.”

A food truck that’s more expensive than an actual restaurant? White guilt over low prices? Falafel as status symbol? There are enough meaty chunks left on this Bedford Ave. Falafel War story for us, Gothamist, the New York Post, and maybe even the Times to take a shot at it, as long as each of us turns the screw of the trend angle just enough to give our commenters a new reason to express their distaste for the residents of Williamsburg.

Because that’s really what it’s all about: a pretext for cathartic loathing of the young and trendy—in other words, self-loathing. We lash out in order to deflect attention from our own shortcomings and neuroses. It’s all very sad, if you think about it too much.

I mean…these fucking hipsters now have to have fancy gourmet falafels to tote on their daily fashion parades up and down Hipster Boulevard. What next? I’m sure it will be something!