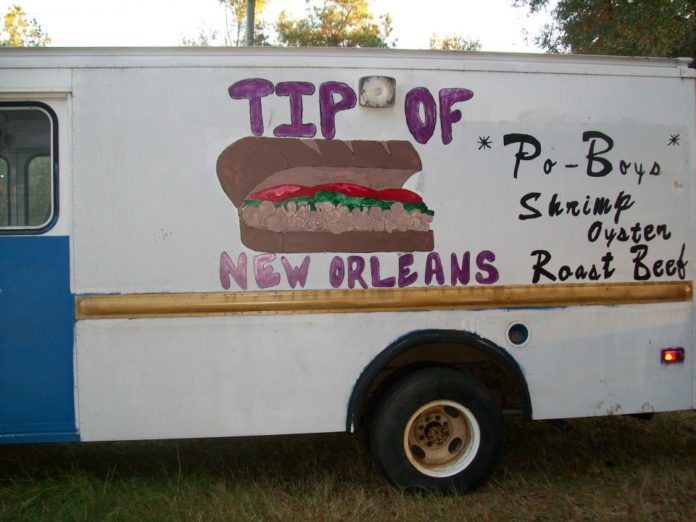 It’s the stuff of Food Network reality television, and it’s here in Troy.

Tip of New Orleans is a food truck making the rounds in the area serving up bit of Cajun cuisine – along with quick food favorites.

“We do different meals in different areas,” said Terry King, Tip’s chef. King and his wife Rhonda, the business owner, live in Atlanta, but wanted to give Troy a taste of their meals on wheels.

“I said, ‘Hey, you know what? They don’t have a food truck in Troy,’ ” King said. “We want to give Troy a little flavor. We want to get people food while it’s fresh and nice and being mobile allows us to do that.”

The business serves up po’boys, other sandwiches, hotdogs, fries and a daily hot meal special, and the truck makes the rounds wherever people look hungry.

So far, King said some companies along Brundidge Street and workers at HB&G have made him and the rest of Tip’s staff feel welcome.

On a recent outing, there was a steady stream of lunchgoers visiting the Tip’s truck window outside Hendrick’s Home Center – and it wasn’t even noon.

King said his wife has roots in Troy and his children and grandchildren live in New Orleans, so the business is a good combination of family ties. Tip was also King’s grandfather’s nickname.

King said there is a plan to expand the food truck route, and to even one day include a restaurant if Tip’s customer base grows. But right now, the truck has everything the crew needs to get hot food quickly to people who need a fast option – and that’s the Tip’s crew’s main priority.

“It’s a kitchen on wheels,” King said. “We have hot, running water. We run on a generator. Lots of people don’t have time for lunch, so we are here to bring it to them.”

Tips of New Orleans has a current schedule of Wednesday, Thursday and Friday in Troy, King said.