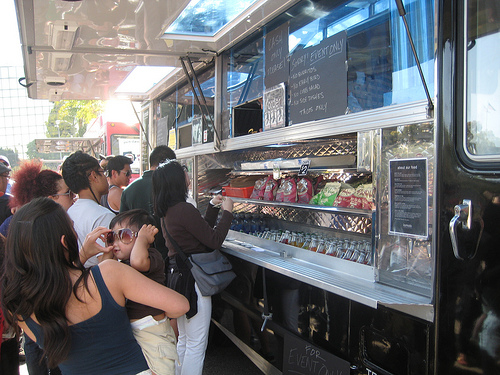 By Jeannie Choi | Bread for the World

Yesterday, an NPR story highlighted a new initiative by school food services in New Haven, Connecticut, to combat hunger among children through the use of food trucks. An increasingly popular form of food service for hip, urban foodies, the food truck is now being used to provide hungry kids in New Haven with food during the summer months when school meals are unavailable. Many people don’t know that children growing up in low-income households depend on school meals for their daily food.

According to the story:

This year, Cipriano plans to serve 40,000 meals during July and August. The truck’s now got a generator and electric refrigerators. He’s serving basic bagged lunches for now — usually a sandwich, a piece of fruit, a carton of milk. But soon he hopes to add more trucks to serve hot meals, or even offer a walk-in truck with a salad bar like the ones that are popular with students at New Haven school cafeterias.

Cipriano’s idea is catching on. The story reports that Fayette County in Indiana is also planning to use a food truck in an effort to decentralize feeding sites so families with transportation problems can still have access to food in the summer.

Keeping children across the country nourished during the summer is a yearly struggle. Back in 2009, Bread for the World reported that

“there are far fewer summer food sites than schools providing meals … the result is that about nine out of 10 children who receive free or reduced-price lunch do not receive meals from the Summer Food Program.”

Certainly, churches and congregations can help to ensure that children have access to nutritious meals when school is out by signing up to be a Summer Food Service Program (SFSP) sponsor or meal site. But many churches are already feeling the weight of feeding hungry people in their communities. (Read this testimonial from a local pastor.) So we also advocate asking Congress to continue to support programs such as SNAP and WIC, which would help families gain the ability to serve meals at home that their children would normally receive at school.

+Ask your member of Congress to support programs for poor and hungry people!