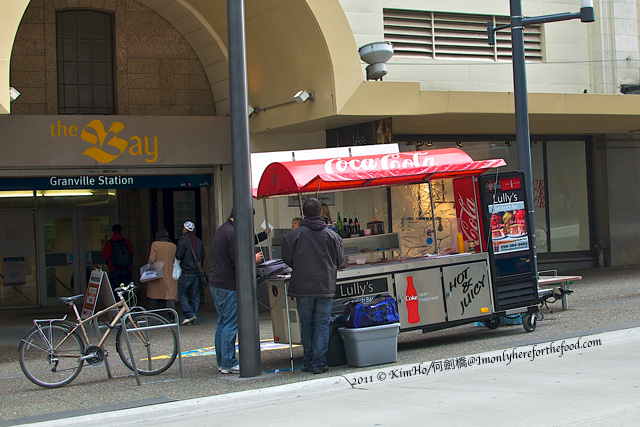 Back when the original set of food carts came out, the one that we had to admit was a bit “different” from the rest was PanDa Fresh Bakery. While some of them would be as expected in other cultures (skewers from Chinese Skewer King and Satay King), others went for fusion (Cartel Taco, et al) and some went for old school type (pizza from Ragazzi, pulled pork sandwich from Re-Up and crepes from “>Kimono Koi Crepes), the folks from PanDa made a twist by offering stuffed croissants. Alas, it seems things went sort of sideways and they have come back in the form of Lully’s Sandwich.

Located just outside of Granville Skytrain Station (Granville Street exit), it has one thing that their old location didn’t have: foot traffic. After all, for food carts to work, you ought to have a lot of that. Without pedestrians, people might as well go to a sit down restaurant! Of course, without a good product, that would be meaningless. And what are they offering now? Montreal smoked meat sandwiches and, in an interesting twist, they seem they are associated with Lully’s Sandwich Bar from Victoria to bring their smoked meat goodness to Vancouver. Of course, there are some bigger questions with the main one being: would a restaurant formula work on the streets? Of course, with the caveat I have NOT being to Lully’s Sandwich Bar, I can’t say how they operate over there and can only based my thoughts on what they are offering from that cart. Instead, I will make a trip to memory lane and compare it to Kaplan’s Star Deli (it’s Downtown location which has closed). (Of course, I could have tried to compare it to Carnegie Deli, that might be an apple/oranges comparison of sorts, as I had their Woody Allen, which has pastrami and corned beef).

Of course, I am jumping ahead. After making my order, aka, telling them I wanted small, medium (the one I ended up ordering in the end) or jumbo stacked, they start putting some packed cuts of meat into a steamer. Of course, that might raise some questions: would it be good doing it this way? Actually, this method is a workable solution. Under normal conditions, the meat would be steaming and cut to order. However, when purchased in big slabs and taken home, guess how would you re-heat them? Suggested method is usually to cut them into pieces and them steam it for a couple of minutes. Sure, it takes away some authenticity but, given we don’t have the same consumption volume as in Montreal, we have to give some to get some. And the cooking alternative might be what needs to be done…

And here it is, the medium Montreal smoked meat sandwich, served with a pickle. Not necessarily a big fan of pickles so won’t say much. I had the option for yellow prepared mustard or Dijon mustard. OK, I went for the “untraditional” route and had it with Dijon. The rye bread, was a bit… Generic? But, the main question is… How is the meat?

The first part that left me with mixed feelings was the fact the meat was borderline sliced type. Now, Carnegie Deli did that with the Woody Allen and Kaplan’s did that with their Montreal Smoked Meat. However, I had sort of different type of expectations for them, specially because they were reheating them eat, they could have had it roughly cut. I guess, for purposes of consistency, they went for the sliced method.

The question would now be, how does it work as a whole package? In a way, it felt sort of mixed, the main problem for me being the texture. While piled high (I don’t want to imagine the jump extra), when I bit into it, there was no “resistance” from the meat. I am not sure about you, just that, I was expecting something to chew. In this case, it became too soft for me. From a taste perspective, actually, it was savoury and a smoke-like taste, characteristic of this type of meats. Because I asked for Dijon, it gave a contrasting “kick” something that others might not necessarily appreciate. In that case, I guess regular prepared yellow mustard would be for you.

So, how does that make it overall? Well, two things hit hard: the first one is price. One of the issue I raised back with Panda was it’s price. This sandwich is $7.50 which, from a street food perspective, it ain’t cheap. Of course, given they are bringing it the smoked meat from Victoria, I guess there ought to be some overhead. But, if we put that aside from a moment, there is the second factor with was (literally) external ones. The day I went was a cold day (as in borderline 0C) and it cooled down really fast after I unwrapped it (and, of course, to take a picture first). Compared that to eating it at the food court in Pacific Centre: weather won’t be an issue. In the end, if I were to share it with somebody as a snack, it would work. Back by myself as a whole sandwich… I didn’t necessarily convince me. But, once again, I am sure others will appreciate it.