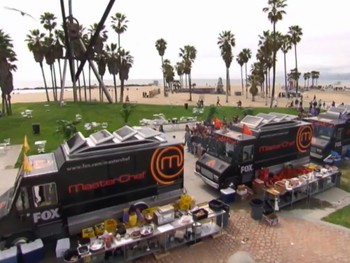 The MasterChef producers have driven us to Venice Beach for our next Team Challenge. There are homeless people everywhere and I say a silent prayer for them. I have been unemployed for over two years and have no savings left. I know it could just as easily be me sleeping on that dirty sidewalk.

When we see three food trucks headed our way I shout in spite of myself. This will be a Food Truck Challenge and owning a food truck is MY DREAM. I want a food truck more than I want to be back in a pair of size four pants. And that my dear is A  HELL OF A LOT.

Stacey has the advantage and she gets to choose her team (Tali, Becky and Frank) as well as everyone else’s PLUS she gets to choose the cuisine everyone has to cook in their food truck. The goal is a simple and honorable one: We are competing to raise money for the Boys and Girls Club of America. The team that sells the most dishes and makes the most money WINS.

As I watch the show and hear Stacey say she considers me competition I take it as a compliment. She says she’s going to try to take me out of the game by putting me on a team with David because she knows we don’t get along. The truth is that David and I have a strong bond even though we argue about EVERYTHING like brother and sister. I don’t think anyone on the cast understands how close David and I are. We’re both Latino and we both grew up in less than stellar neighborhoods. I know we will be life-long friends. In fact as I type this up at 2 am, I am waiting for him to arrive at my home with his lovely wife. He is moving to Tempe soon and he’s crashing at my place while he’s apartment hunting.

Back to the show: It’s a beautiful day on Venice Beach and Stacey has rounded our team out with Anna and Tanya. The third team consists of Christine, Felix, Josh and Cowboy Mike. Stacy’s team is cooking Mexican cuisine, Josh’s team is cooking Indian and our team, led by Anna, will be cooking American. After some back and forth, we decide on a delicious cowboy slider plate with fresh fried potato chips. It’s PERFECT beach cuisine. The cards are definitely stacked in our favor. But like any team situation you are only as good as your weakest link, and today it’s David.

When the crowd rushes our food truck, there are no burgers ready. David is our grill master and even though Anna has repeatedly asked him to get started with the burgers, he has not. It takes almost fifteen minutes to get those first few baskets out. At least a dozen people leave our line and get into the blue team’s line while we try to get caught up. I spend most of the challenge outside of the food truck making potato chips and don’t have any idea what’s happening inside. What I can see is that our line doesn’t seem to be moving.

Gordon calls time and the producers are in our face with their cameras asking us if we thought we won the challenge. I’m the only one on our team that says NO. David freaks, “Monti you’re such a lemon! You’re never happy! Nothing is ever good enough. Our lines were the longest!”

“I’m a lemon?” I say loudly. “They asked me a question and I responded honestly. Our lines where the longest cause we weren’t serving food fast enough!” David and I continue to argue, and of course all of this is edited out. They cut straight to Tanya asking me why I’m upset. This is when I say “Should I answer that or is David going to freak the f**k out?”

In the end it is Stacey’s Red Team that wins the challenge with their delicious Steak Tacos. Josh’s Blue Team gets second place with their stand out Chicken Tikka Masala. Our Yellow Team sold almost HALF of what Stacey’s team did, with just 86 Crazy Cowboy Sliders. We will be facing one hell of a pressure test.

We have 60 minutes to make tortellini in a simple chicken broth. I have never made tortellini before, but I make pasta for my kiddo all the time so I know I can do a good job.

Tanya is at the station behind mine and out of the corner of my eye I can see her crying. She did an amazing job on our team yesterday and I wish that she had been given safety. I love that Graham gives Tanya a pep talk. I had no idea that had happened. He really is the most amazing person.

Our time is up and I have to give it to David. He has insanely fat fingers and has NEVER made them before, his tortellini are beautiful.

This next moment is one the highlights of my MasterChef journey but it’s left on the editing room floor. Joe Bastianich, the man whose mother put Italian-American cuisine on the map tells me that he loves my tortellini. He goes on and on about them. He apologizes for calling me fake in the beginning of the competition and says I am the real thing. It is so unexpected from Joe that all I can say when he asks me how it feels is “THAT IS SO F**KING AWESOME!” Who’s the classiest contestant in Master Chef history? THIS GIRL.

Tanya and Anna both have subpar tortellini but it is Anna that has to walk out of the MasterChef kitchen. Anna has a beautiful blog, braveapron.com, and I highly recommend you check it out. It’s just gorgeous and her passion for all things culinary radiates from every post. That girl is going to go far. I know it.

Our next Mystery Box Challenge is hands down one of my favorites. We get a beautiful rabbit to butcher and we get to cook alongside my newfound hero Graham Elliot. It’s amazing to watch him construct a plate. He truly is an artist. Becky wins the challenge and her advantage is that she gets to choose what kitchen tool we all have to cook with. She chooses a deep fryer for herself and a pizza stone for everyone else.

I received a lot of tweets this week about Becky and her negative comments about me. Without a doubt Becky is one of the most talented and passionate chefs I’ve ever met. While it’s disheartening to hear her say that I am not MasterChef material, I don’t take it personally. We are simply from different sides of the culinary tracks. I adore preparing affordable, quirky dishes from every day ingredients that you can find in any grocery store. As a time crunched single mom, I also have a profound appreciation for plates that don’t take all day to create and fit within my very tight budget. Becky is more of a foodie. It’s all about exclusive, high-end cuisine for her. She doesn’t bat an eyelash at spending 16 hours making Ramen from scratch and going to four different markets to shop for ingredients that cost more than a week’s worth of food for me. We’re just from two VERY DIFFERENT worlds.

The highlight of this episode for me is Joe Bastianich and his beautiful compliment to my dish. (THAT’S TWO DAYS IN A ROW FOR HIM!) It’s exhilarating to hear him say that on a rainy day he would eat a whole bowl of my roasted carrot soup. When Gordon FLIPPIN Ramsay tells me my soup is delicious but that my soda bread is PHENOMINAL I am over the moon. The judges announce that I have the best dish of the Pizza Stone Challenge and it feels INSANE. When I realize I have made it to the MasterChef Top 10 I start to hyperventilate. FOR REAL.

As always, someone has to give up their apron and the bottom 3 are Tanya, David and Cowboy Mike. Gordon tells Mike that he is going home and I start getting dizzy. I never thought Cowboy would go before I did. Gordon then reveals it will be a double elimination and I grasp my counter to keep from falling over. Tanya is leaving and David is staying. I CANNOT BELIEVE I AM IN THE TOP 9 OF MASTERCHEF. Me, the unemployed single mom that can’t get her two year old to eat anything she cooks beat out over 60 thousand people to make it into THE TOP 9 OF MASTERCHEF.

HOLY CRAZY TALK BATMAN. Do I really have a chance at the MasterChef title?