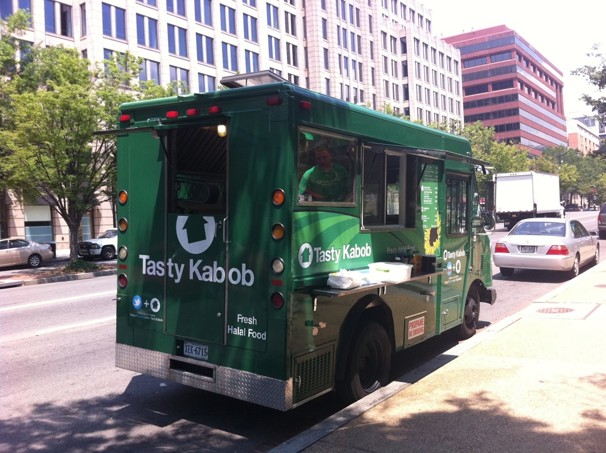 The short alertfrom the D.C. Fire Fighters Association, Local 36, immediately caused an uproar when it hit Twitter feeds this morning:

Both reporters and members of the D.C. Food Truck Association started trying to track down more details, which were scarce. The D.C. Fire Department would say only that a female suffered “burns about the face and respiratory burns.” A spokesman called it a “priority one” rescue, which means the injuries were life-threatening.

But when reached early this afternoon, Tasty Kabob owner Steve Hanifi said that a cook on his truck suffered only minor injuries in the accident this morning near Metro Center. She was injured, he said, when she held down the propane ignitor too long and then tried to light the flame under the truck’s steam table. Hanifi said the cook had just transferred from another Tasty Kabob truck and wasn’t as familiar with the second vehicle’s equipment.

“I guess it burned her a little bit on the side of the face,” Hanifi said. “The fastest thing I could do is call an ambulance.”

The cook, named Anna (Hanifi could not remember how to spell her last name), was taken to a nearby hospital and treated, the owner said. “It wasn’t severe enough for her to be kept there,” Hanifi added. “She was fine in the face….The only worry they had was that she might have damaged her eye.”

Hanifi noted that his cook called him on her cell phone and said she felt fine enough to return to work. The owner said he wouldn’t allow her back to work until doctors had cleared her.

“At first, it seemed very shocking,” Hanifi noted, referring to when he heard the news. “It was just something minor that blew out of proportion.”

The accident comes at a delicate time for Washington’s food truck owners. They’re still waiting for the D.C. Department of Consumer and Regulatory Affairs to issue the latest vending regulations, which have been fiercely contested by brick-and-mortar restaurants and their allies who would like to see more restrictions placed on trucks. One issue that inline businesses have harped on is public safety.

Kristi Whitfield, co-owner of Curbside Cupcakes and executive director of the D.C. Food Truck Association, isn’t quite sure how this episode morphed into some life-threatening situation and claims of an explosion on the truck. Both she and Hanifi said that the cook didn’t even suffer first-degree burns and tried to refuse a trip to the hospital.