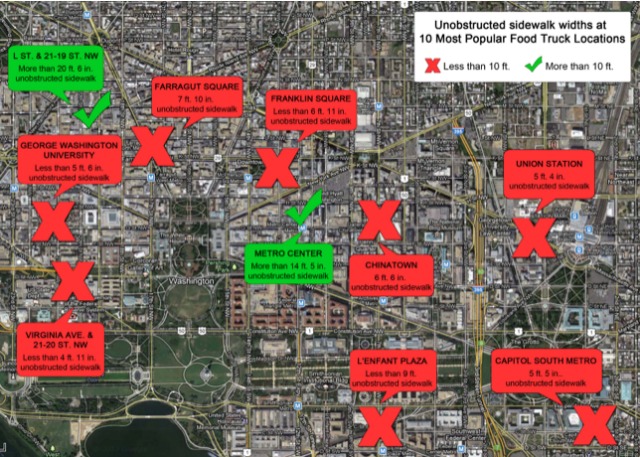 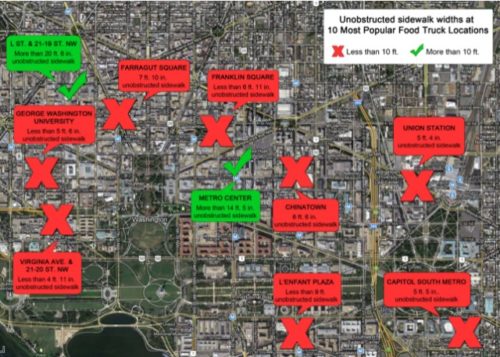 The regulatory battles over the city’s growing fleet of food trucks continues, and the very food truck owners that were pleased with an initial draft of regulations that would govern them are now worried that revisions will slowly drive them out of the most popular lunch spots—and eventually out of business.

Late last week the D.C. Food Truck Association launched a petition—Rules That Work—to encourage Mayor Vince Gray to drop a regulation that would limit food trucks to locations where there are 10 feet of “unobstructed” sidewalk. According to a survey of downtown D.C. done by the association, that rule alone would push food trucks out of eight of the 10 most popular spots, including Farragut Square, Franklin Square, Chinatown, and Capitol South.

“The Gray administration has cut-and-pasted rules meant for stationary brick-and-mortar businesses and now proposes applying them to our very mobile businesses,” said Che Ruddell-Tabisola, executive director of the Food Truck Association and co-owner of the BBQ Bus food truck, in a press release. “However, that makes no sense. A food truck doesn’t permanently reduce the amount of sidewalk available for pedestrians, unlike, for example, seating for a brick-and-mortar restaurant’s outdoor café — for which the 10-foot rule was intended.”

While the regulations allow the D.C. Department of Transportation to make exceptions within designated Mobile Roadway Vending locations, food truck owners worry that there is no set process for establishing those locations. Additionally, as the Post reported today, they wonder why the rule should exist if exceptions will be made to it:

But food trucks owners are put off by a still-unknown process that relies on the kindness of bureaucrats to keep their businesses alive.

“I think the question is, why would you put forward regulations that are only successful when you make an exception to the rule?” wonders Ruddell-Tabisola. “This approach just makes no sense. It seems like what they’ve done is cut and paste brick-and-mortar regulations and applied them to food trucks.”

Updated regulations for the food trucks have been on the drawing board since January, ever since brick-and-mortar restaurants complained that the mobile vendors were operating on an unfair playing field. (Food truck owners disagreed, saying they were regularly ticketed and shut down by polide.) In October, food trucks started paying the same 10 percent sales tax that regular restaurants pay.