WASHINGTON — On a recent Sunday afternoon, three paddle boarders coast slowly past a pontoon boat that’s anchored in the Potomac River between the Key Bridge Boathouse and the Potomac Boat Club. The paddlers strain their eyes to read a sign on the boat; they take a few seconds to digest what they read before turning to talk to one another. Their facial expressions register confusion, disbelief and excitement — all at once.

Those on the pontoon boat are used to the “slow roll” and “creep” of boaters, kayakers and paddle boarders they’ve seen in the last two weeks. They’re the owners of Nauti Foods — D.C.’s first food boat, which launched July 26.

With hundreds of food trucks roaming the streets — and what seems like a new restaurant popping up each week — D.C. pedestrians have no shortage of food options should hunger suddenly strike. Now, those on the water have a place to grab a bite to eat.

“You can’t beat the view; this has got to be the best restaurant view in town,” says Ari Fingeroth, who, with co-owner and girlfriend Tammar Berger, sells ice cream sandwiches, popsicles, hot dogs and locally made food products to those on the water. 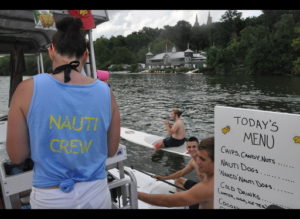 Fingeroth and Berger had the idea for Nauti Foods a year ago.

“We were out on the river last summer, watching all the paddle boarders go around. We were grilling and having a few drinks, and we were like, ‘I bet they’re going to want something cold to eat — a popsicle or something. Someone should be doing that,'” Fingeroth says.

The idea lost momentum over the winter, but when the conversation resurfaced in the spring, Fingeroth and Berger decided to go after it. So they approached the city and began navigating the choppy waters of the District’s laws, regulations and red tape. The hardest part of it all, Fingeroth says, was being the first.

“It was pretty much the same as food truck licensing, but there were a lot of twists because [the city] never anticipated the river,” says Fingeroth, who also owns Federalist Builders LLC, a home remodeling company. “All of the food truck laws are written as ‘mobile vending,’ ‘your vehicle’ and ‘registration’ — they’re all very vague terms. I don’t think they ever anticipated someone was going to turn around and turn those vague terms into a boat.”

After several months, Fingeroth and Berger did just that. They purchased a 1994 pontoon boat, parked it in the driveway of their Bloomingdale home and planned their business.

A Best Buy employee delivered freezers to the on-shore boat; they outfitted the pontoon with a wood tile floor and developed their brand and logo. They even decided on one of the boat’s flagship menu items: the Nauti dog — a spiral-cut hot dog, grilled to order.

“The spiral cut just makes it taste better,” says Berger, an attorney and consultant for the World Bank and co-owner of Off Road Indoor Cycling. “It actually cooks faster; you get more surface area to the grill, so it gets a little crispier all the way around. Plus, the condiments go right into the hot dog.”

In addition to ice cream sandwiches, candy bars, hot dogs and chips, Fingeroth and Berger sell food items from local vendors. They’ve had everything from Bullfrog Bagels to Dolcezza push-pops to Goûter tonics to baked goods from Sticky Fingers Bakery on the menu.

“This weekend we have fresh-squeezed lemonade from the Red Hook Lobster truck,” Berger says.

The boat even accommodates the river’s furrier friends, offering homemade dog treats to pups boating on the Potomac with their owners.

“And as the summer goes on, we’re seeing what sells, what doesn’t, what people want on the river, and we’re going to try to keep partnering with local businesses to try to feature different small local people every weekend,” Berger says. “Last weekend, when it was 85, 90 and sunny, we could not serve enough ice cream.”

“No way; are you guys selling food?”

Max Getler stands on his paddle board and does the “squint” look Fingeroth and Berger have grown accustomed to seeing. He paddles a little closer to speak with Berger, who enthusiastically explains the whole operation to the young twenty- something. She even talks him into ordering a Nauti dog.

“Oh, this is a really cool idea. I’ll be right back,” Getler says, before paddling to the Key Bridge Boathouse, where he works, to retrieve his money and two friends.

Fingeroth fires up the grill and throws on a few Nauti dogs, which take four to five minutes to cook up. In the two weekends Fingeroth and Berger have been out on the water selling food, they’ve noticed quite a few people paddle or ride without money. But they’re not worried about that always being the case; they call it a “learning curve.”

“I think it will take a few weekends for people to get used to the idea that we’re out here,” Berger says.

Getler paddles back with his credit card wrapped in a plastic bag. (Yes, Nauti Foods accepts cards — and with no minimum charge.) Getler changes his order to three Nauti dogs and an ice cream sandwich; his friends order ice pops.

“This is a really good idea. The only thing is, people are really cautious about bringing their valuables out on the water,” Getler says. “I guess this will just force them to be brave enough to do that.”

Fingeroth estimates Nauti Foods served 100 to 200 customers on its first day. The following Sunday, which was cloudier and less crowded, they saw between 20 and 50, he says.

Berger says a lot of customers — especially the hot-dog eaters — sit and devour their purchases near the boat. They give the Nauti Foods staff their trash when they are done. If customers take their purchases to go, Fingeroth and Berger give them a plastic bag with a carabinier, so they can clip their trash to their life vest and dispose of it when they get to shore.

“If someone is on a standup paddleboard, you don’t really have a place to throw your garbage, and one thing we wanted to do was make sure is that we keep the river clean,” Berger says.

When obtaining the permit for Nauti Foods, Fingeroth and Berger had to specify their anchored location. They chose to be just west of the Key Bridge, due to the growing popularity of kayak and paddle board rentals at the Boathouse.

“Usually you want to get people as they’re finishing their loop on their paddle boards, and they can kind of sit and enjoy before going back in,” Berger says. “We’re here so they can come out and have a whole afternoon … they have a place at the end of their trip on the water to have a cold drink or an ice cream.”

However, Fingeroth and Berger are open to amending the permit in the future should another location prove popular, or for crowded holidays such as the Fourth of July. They are even open to growing the operation next summer to include weekdays or adding another boat, if this summer proves to be a hit.

“I think the interest in the river has gone up in the last few years, and I think that’s happening in other parts of the city too,” says Fingeroth, who has been boating on the Potomac since 2000.

But for now, the Nauti Foods owners want to focus on getting the feel for the business they are building.

“When we came out here last weekend, no one had ever done this before. So understanding what the market was, what the demand was, what people wanted on the water, what they didn’t, when they’re out here, when they’re not — we’re still feeling all of that out,” Berger says. “When we come out next year, we can hit the ground running … or hit the water running, I guess.”

Fingeroth and Berger also predict others will follow suit.

“It’s only our second week, and I don’t think anyone had the idea until last week, but we’re positive there are going to be other boats on the water next summer,” Fingeroth says.

In just two weeks, the news of Nauti Foods has spread across the nation. Friends in Texas and Cape Cod have contacted the couple to let them know they heard about Nauti’s launch. They’ve also received requests via Facebook and Twitter to bring Nauti Foods to other waterfront cities.

“It’s been interesting that people have kind of been keeping an eye on this from outside D.C. too. We didn’t really think we’d have a national appeal with such a small, local project,” Berger says.

But there’s no denying the appeal of a floating food truck.

“The dogs are hot and the drinks are ice cold,” Berger says. “What more can you ask for on the water?”