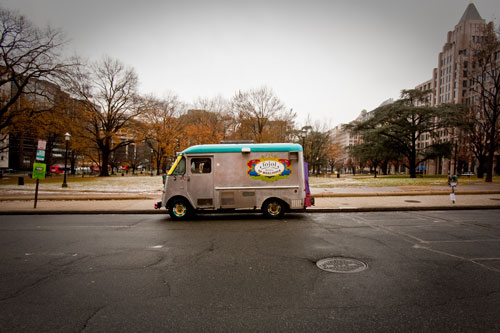 Last Monday, BurGorilla and What the Pho? food truck owner Rob Estep got to sleep in an extra hour for the first time in a long time.

This month, he hasn’t had to worry about competitors cutting him off, feeding the meters, or overeager parking enforcement. Instead, his trucks roll up hassle-free to new “mobile roadway vending zones,” where the District allows a limited number of vending vehicles, chosen through a lottery system, to sell food (or other goods). The zones are one of the biggest changes to come from the regulations that passed this summer after more than four years of hearings, debates, and protests that often pitted brick-and-mortar restaurants against their mobile competition.

Since they won spots in the lottery, BurGorilla and What the Pho? have guaranteed locations in some of the busiest lunch corridors, Monday through Friday, every week this month. January will be another story. BurGorilla has only four assigned days, and What The Pho? has three. “And they’re not ideal spots either,” says Estep of the State Department area and Union Station, where the pho truck hasn’t built a following.

“I guess we’re going to have to go out there and find new spots and try to build our business back up, which we’ve already done,” Estep says. “It’s like starting all over. Most of my customers are regular customers.” He anticipates at least a 10 percent decrease in weekly sales, but more likely 15 to 20 percent.

When entering the lottery, trucks rank their location preferences for each day of the week, then are assigned spots for Mondays, Tuesdays, and so on throughout the month. For December, 115 trucks entered the lottery for 95 spots in eight zones, which include the most popular vending locations, like Farragut Square, Union Station, Metro Center, and L’Enfant Plaza. That means every day this month, there are 20 trucks that applied for spots and didn’t get one. They’re required to stay at least 200 feet—roughly the length of 10 trucks—away from the zones, or face a $1,000 fine. (Although in the early rollout, the city is simply issuing warnings and asking trucks in violation to move.)

January is even more competitive: about 140 trucks applied for the same 95 spots, so operators will only be guaranteed at least three spots per week in the zones. More than 200 food trucks are registered in D.C., so getting a guaranteed spot could become even harder in the next few months, especially once the weather starts to warm up again. Trucks pay $25 to enter each month’s lottery, plus an additional $150 if they accept the city’s assignments. That cost is the same whether trucks win five days in the lottery or three or one.

When the Department of Consumer and Regulatory Affairs initially laid out its map of the mobile roadway vending zones in May, it identified more than 180 parking spots in 23 zones, not 95 spots in eight zones. So what happened to half of those spots and nearly two-thirds of the zones?

DCRA worked with the DC-Maryland-Virginia Food Truck Association to limit the number of zoned spots, in large part because trucks preferred greater ability to roam. Many of the zones DCRA initially identified—historic Anacostia, Minnesota and Benning avenues NE, and Friendship Heights—were locations where congestion wasn’t a problem and most trucks weren’t going regularly. DCRA vending program manager Vincent Parker says that rather than reserving spots that would likely be left vacant throughout lunch, DCRA opted only to create zones in the most crowded areas. If other spots get crowded, the agency can add more zones.

For diners, there’s good news and bad news: Your favorite truck may no longer park near your office, but because of the rotation, you’ll have the chance to try lots of new trucks that may not have ventured near you before. Some of the busiest neighborhoods now have fewer trucks, but areas that didn’t see a lot of food truck traffic may get more as vendors search for new hotspots.

While some truck operators aren’t keen to be assigned to locations where they haven’t built up a fan base, a few benefits are clear. Operators no longer have to wake up long before the crack of dawn in order to secure a parking spot. Until this month, vendors frequently used to send personal cars out before 9 a.m. to sit on spots until their trucks arrived. The headaches of parking enforcement, feeding the meters, and the many, many tickets should also ease for trucks that have guaranteed spots weekdays from 10:30 a.m. to 2:30 p.m.

Those benefits, of course, depend on actually getting placement through the lottery. Truck operators have mixed reactions about their zoneless days, which some call “roaming” or “wildcard” days.

On one hand, the food truck business model is meant to be mobile, so some see one or two days without an assigned spot as a chance to be more fluid and respond to customer requests (as long as those requests aren’t for, say, Farragut Square). “This industry’s central tenet is roaming,” says Ruddell-Tabisola. “For BBQ Bus, we don’t want to be locked.” And even though Estep is not too thrilled about the schedule for his pho truck next month, he doesn’t want the city to add more zones because that would mean even fewer opportunities to bounce around and accommodate requests.

Curbside Cupcakes opted out of the lottery system altogether because it wanted to be more mobile. Co-owner Kristi Whitfield says the system doesn’t make sense for a dessert truck like hers, which sometimes visits up to four locations a day rather than linger over a long lunch at one spot. But she says Curbside Cupcakes will eventually give in to the lottery: “We’ll have to because the best spots have been sort of precluded from, I’d say, the free market.” She anticipates that the city will eventually add more and more zones. “We won’t really have the option of roaming by the time this process has fully expressed itself.”

The Big Cheese owner Patrick Rathbone says he’d gladly have one or two “wildcard” days in exchange for guaranteed spots with no headache at the high-traffic locations the rest of the week. But if his truck was only guaranteed two spots per week? “Yeah, that would be kind of tough. At that point, it’s almost like, why bother entering the lottery?”

Rathbone says Big Cheese has developed enough of a brand that he feels the truck doesn’t need to be at one of the zoned locations (though it does do better in the high-traffic spots). Some of the lesser-known trucks, Rathbone says, will likely struggle more because their business model relies on them being in prime locations and drawing walk-up diners.

Not everyone is so keen to have any “roaming” days. Phonation co-ownerHanh Vu says she’d like to be guaranteed a spot every day. This month and next month, she has Wednesdays to roam. Last week, Phonation went to 20th and L streets NW and also plans to visit Chinatown. “So far, so good,” she says. But as for the possibility of more than one roaming day a week: “I’m not going to be happy.” She’d like to see the city add more zoned spots for trucks.

For others, the uncertainty of the lottery was enough to call it quits. Cirque Cuisine co-owner Sean Swartz cited the new regulations as the primary reason for closing his truck last month. In December’s lottery, Cirque Cuisine was assigned Farragut Square and the State Department area, where it had never really gone or built a following. On Fridays, the truck didn’t get a spot in any assigned vending zones. “It’s just too much,” Swartz says. “We spent three years really fighting really hard to develop a real faithful and loyal following at the locations that we go to and people know us and expect us to be at certain locations on certain days.”

For those sticking it out, truck owners say it’s too soon to tell which neighborhoods might see a bump because of the regulations. Many trucks are going to areas that were mostly considered slightly less desirable: West End, Foggy Bottom, Van Ness, Friendship Heights, Judiciary Square, Patriot’s Plaza, Chinatown, and Capitol South, to name a few.

Others are looking to venture to Virginia or Maryland more if they’re not guaranteed a spot in the District’s zones. “The trucks that are licensed in multiple jurisdictions, if they have more days off, I’m sure they’ll spend more time in the suburbs,” says Rathbone, who spent his first wildcard day in Ballston (though he also plans to check out D.C. locales like Van Ness).

At least, Curbside Cupcakes’ Whitfield reasons, there’s now a system, and food trucks know what they’re dealing with. “Living in fear of what will the city do is a hard way to build a business,” she says. “At least to my knowledge, we’re no longer talking about banning food trucks.”