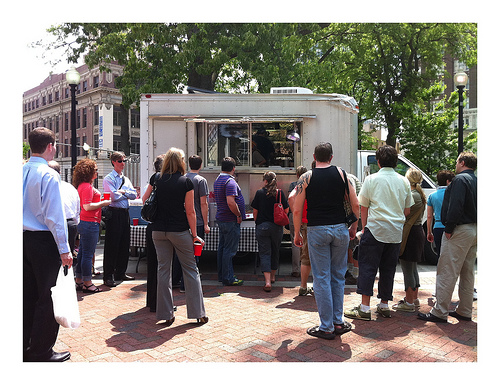 A few days ago, someone on Twitter asked why there weren’t any food trucks in Memphis, despite a city ordinance allowing them that passed earlier this year.

I’ve been wondering the same thing.

When the ordinance came up for vote in April, people packed downtown’s Court Square for a big food truck lunch. When the Food Network’s “Great Food Truck Race” came through town, the lines were ridiculous. But save for the odd hotdog stand downtown or the mobile fare offered at festivals, there are are seemingly no food trucks to be found in Memphis.

Given past events, we know that people in Memphis will support food trucks. We know that a few restaurants (Parker’s Water Ice, YoLo, Fuel Cafe) have trucks.

You could argue that Memphis doesn’t have much of a pedestrian culture. Maybe that’s it, but Nashville doesn’t either, and they’ve got tons of trucks selling everything from tacos to grilled cheese on a daily basis.

Pedestrian cultures don’t just happen, though – they have to be made. It’s sort of a chicken-and-egg problem, though – in order for someone to want to open a business outside, they’ll want to make sure there are enough people outside in the area, but if there’s no reason to go outside, there won’t be any people, and so on. So maybe we should start small. Park at Overton Park on a Saturday. Pull up to Court Square during lunch on a Friday. Someone could make a killing parked at one of the inlets that leads to the Greenline on a weekday evening.

Maybe I’m totally missing something. Maybe no one wants to take the risk first. Maybe no one’s had the time or money to get a truck up and running. I’m not sure why we don’t have regular food trucks yet.

But what I do know is that if someone parks one regularly, I’ll be there, cash in hand, ready to eat.