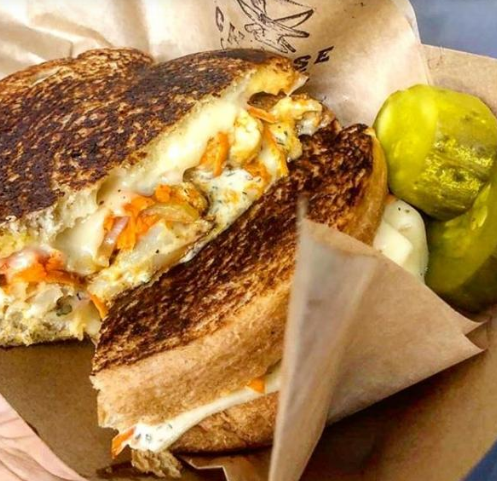 Fanny Slater will spotlight her love for the Buffalo Baby sandwich to the world on Cooking Channel episode of “Best Thing I Ever Ate.”

Chef, cookbook author and television personality Fanny Slater will present the food truck on the special ‘On Wheels’ episode of the show, featuring chefs and their favorite food truck experiences.

“Catch me swooning over this creamy, spicy, game-changer grilled cheese goodness from my hometown on the new season of The Best Thing I Ever Ate,” Slater wrote on Facebook of The Buffalo Baby — CheeseSmith’s most popular menu item. While Slater recently relocated with her husband from Wilmington to the Midwest, she filmed the episode with the food truck back in June.

That same week, the Cooking Channel filmed at Flaming Amy’s, bringing their Churkeychanga out of seasonal retirement for the day, and at Winnie’s Tavern. Cooking Channel has not announced air dates for episodes of shows featuring those two Wilmington restaurants, but they could be part of the same show, being spotlighted by Slater.

The Buffalo Baby sandwich combines Buffalo chicken with creamy Havarti, homemade buttermilk ranch and a crunchy quick-pickled carrot and celery slaw. The food truck opened in spring 2018 with its gourmet grilled cheese options and Parmesan fries. More information on the food truck, and its changing locations, can be found at www.cheesesmithco.com.