By Kate Harmon  |  Flip Side PA

Foodstruck York is back, and organizers say it will be bigger and better than ever.

For locals who have been hiding under a rock, the event took form in August 2013 when a handful of people active in downtown York had an idea.

Food trucks are currently banned from operating in York, except for the one cart with a license from the city.

And while that might change with a new city ordinance, the organizers wanted to bring a food truck-based event into downtown for something new to draw people downtown York.

The first event, held in October last year, brought 14 trucks into town and about 1,700 hungry foodies came out to participate.

The second, held in April, brought more than 8,500 people into town to eat from the 27 trucks.

And Sunday, Foodstruck is back with 50 trucks in a larger location — York’s Penn Park, said co-organizer Philip Given.

Trucks will drive from near and far, some coming from Baltimore, Philadelphia, New Jersey and Delaware, Given said.

Taking feedback into consideration, this event will bring you all the things you love about Foodstruck, but also remedy some of the things that caused complaints, like long lines, Given said. 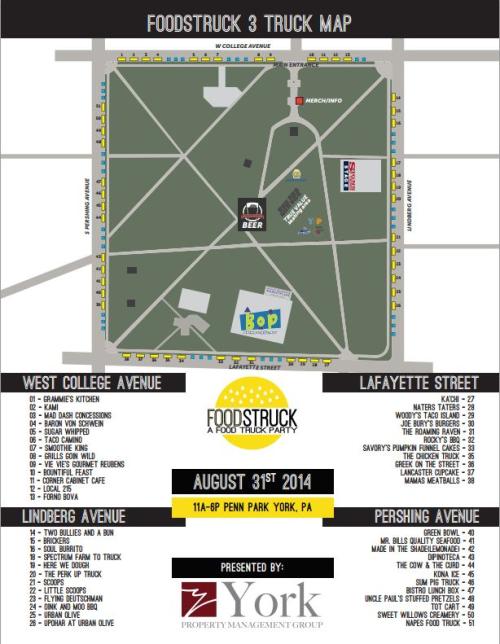 Drinkers, rejoice. This time, there will be beer.

The goal is not to make it into a beer festival, but to help you wash down your eats.

Those partaking buy 3 ounce sample tokens, or combine four of those tokens for a 12 ounce cup. Five tokens cost $5.

More than 16 beers will be on tap for you to try, thanks to Crocodile Marketing, the group that brings York Taste of PA, Yorktoberfest and Hibrewnation.

Last time around, some complained of the long lines that limited what people could try. So far, more than 2,000 people have RSVP’d on the event’s Facebook page. Organizers expect at least four or five times that many.

So Sunday, the event will move to Penn Park, with a whole block of space, Given said.

The trucks will line up on the outside of the park, allowing straight lines to form heading into the park. This should alleviate any confusion over previously winding lines.

This year, you’ll also have more time to eat. Or time to recover and then eat some more. Past events used to only span four hours, but Sunday’s will be from 11 a.m. to 6 p.m.

There will also be more merchants and music if you need a break from all that food.

Like past times, Sunday’s event is rain or shine. Past years have brought rain, so bring a jacket or umbrella.

If you don’t want to drive, or worry about finding a spot around the park, Foodstruck organizers have something new for you.

Two shuttles will be running continuously throughout the day from the Susquehanna Commerce Center and a parking lot at York College.

Harrisburg Area Community College is sponsoring and operating the shuttles, Given said.

One will run from the Commerce Center at 221 W. Philadelphia St., and the other will be from the York College parking lot at the corner of Grantley Road and Jackson Street.

There are also city parking garages and other lots available to use. Find those in the locations tab of the event’s site.

Before you head out the door Sunday, have a plan of attack.

Foodstruck isn’t one of those events you can pop in and out of in 20 minutes just to grab some food, Given said.

First you’ll want to make sure you’re coming with a group of people.

Then head to the Foodstruck York website and to pick out which trucks you and your group want to visit.

Once you arrive, pick a few of those trucks in the same area and split up, Given said.

Then everyone meets back with food, you eat, and then head out again.

Limited chairs and tables will be available, so if you want to sit, you might want to bring your own seating.

“We’re trying to turn it into an all-day, more festival feel,” Given said.

Some lawn games will be on hand, and feel free to bring your own, he added.

It’s hard to ask Given, or any of the other Foodstruck organizers to narrow down their favorites.

But Given gave it a try.

A lot of the trucks coming Sunday are new to the food-truck aficionado.

The go-to for local trucks, he said, is Mad Dash for their grilled cheese sandwiches.

There are a few Asian and Korean trucks that have been popular over past year. And Dipinoteca from Balitmore is bringing its fast-made Italian.

Try something new you won’t get around town, he suggested.

Either way, come hungry. And come ready for a larger event.

“We want it to be a nice, relaxing day for people,” Given said. “Stay and hang out.”

Getting there: Park nearby or take a free shuttle from two locations

Plan ahead: Get a map of trucks and plan your route at foodstruckyork.com.

Join the conversation: Use #foodstruckyork to show off your food.