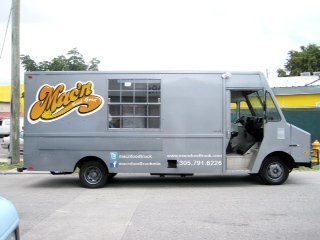 Mac’n, Miami’s first all-vegan food truck is finally set to roll out tonight. You may recall the Miami New Times reporting back in February that truck hopefuls Francesca Lacuesta and Mark Jennings were trying to raise capital to refurbish their truck through Kickstarter, a way for small businesses to raise money by courting mini-investors

Their Kickstarter campaign fell short so the duo had to raise cash the old-fashioned way — they continued to work full-time jobs while working on the truck. Their hard work has paid off and the truck is fully refurbished.

Mac’n may be vegan, but don’t expect to eat only sprouts and twigs. Vegans and carnivores alike will all fall in love with their menu, which changes daily. What’s on tonight’s menu? Cheddar Mac n’ Cheese ($4), “Ham” Mac n’ Cheese ($5), Fried Green Tomatoes ($4), Watermelon Cornbread ($2), Sweet Potato Fries ($3), along with some surprise goodies.

When asked how she feels about competing in a world of burgers, short rib tacos and pork sliders, Mac’n partner Francesca Lacuesta didn’t seem worried, “I’m confident because my food is good. Not everyone wants to eat a burger for breakfast, lunch and dinner. People are inherently open to trying new things. I’ve been vegan for six years and I want to take a risk.”

Mac’n plans to join some food truck roundups and also partner up with Miami clubs and bars to serve the late-night party crowds.