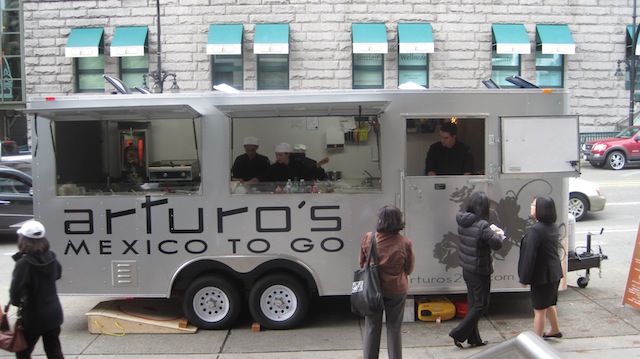 Why would a kudo-magnet chef quit a high-profile chef gig to run a street cart? Isn’t that what the really poor do in developing countries?

Josh Wolfe, who’s cooked for Queen Elizabeth and president Bill Clinton in previous East-coast jobs, says it was the hardest career decision of his life. When I visited Coast, the seafood restaurant he helmed, I declared his crabcakes the best I’d ever had.

The food cart allows him the freedom to go all-out with his passion for fresh, local, wild food. And that’s exactly what he and partner Andy Fielding named their cart in downtown Vancouver: Fresh Local Wild. “It’s ironic. I’m in the fast food category now. How hilarious is that?” says Wolfe.

In this city, all we’ve known of street food until recently has been hot dogs, chestnuts and popcorn. But of late in North America, street food has entered a whole other realm.

It’s expensive to open a restaurant but a cart or even a catering truck –  well, that’s do-able. Wolfe’s gregarious nature fits the role, too. Just watch him ‘joshing’ with customers as he’s cooking up an oyster po’ boy, venison burger or salmon burger, all B.C. or locally sourced.

He’s not the only chef taking to the streets. At Roaming Dragon, the chef, Don Letendre, once presided over the food at the soigne Opus Hotel. Now he’s creating pan-Asian dishes, served from a catering truck on Georgia St. Most of these carts and trucks prep the food early in the day at a commissary or commercial kitchen. Wolfe and Fielding, in fact, built their own commissary and leases part of it out to other cart owners.

Across the street and downwind from them, Cartel Taco, a trio including the chef and sous chef at Bao Bei (yum!) and a partner at Abigail’s Party restaurant offer very good Korean-slash-Mexican tacos. Don’t question. Just try it. In fact, it borrows from one of the most popular food trucks in Los Angeles, Kogi BBQ.

Some vendors are shaky on their feet but fuelled by passion.

Vicky Tran, one of the owners of Poke’m, sells Asian meat and fish balls on skewers which a choice of six sauces. She wanted a street cart long before Vancouver’s pilot program began. “I have a passion for food and travel. I’ve been to Asia to check out the street food and was planning on something like this way before the city started the program.” Business, she says, hasn’t “sky-rocketed” as they’d hoped but they’re persisting. “We haven’t broken even yet and hopefully things will turn around. Our food is completely new to Vancouver. A lot don’t know what Asian balls are about. They’re skeptical at first then they enjoy it.” Their cart cost $15,000 and they’ve been open since September 4.

A couple of carts have been and gone. Chinese Skewer King which resided at Burrard and Hastings is gone and I noticed the cart was for sale on craigslist. A falafel cart, which operated at Main and Terminal, is also gone.

Some vendors keep their fans in the loop through Twitter and Facebook. Others are harder to keep track of. Some days they’re there and others, they’re missing in action. In this age of Twitter, Facebook and websites, how hard can it be to make a post a day?

I’ve visited most (not all) of the trucks and carts and here are my reviews, in alphabetic order.

It’s parked right outside my office building so I’ve visited several times. I liked the burrito salad bowl with fresh green salad, choice of protein and tortilla. I’ve also brought back two bowls of the mellow tortilla soup for my lunch. Oooh, I want one now! As for the burrito, I’ll not order it again. The filling was too wet and sludgey.

Who knew Mexico and Korea were made for each other! Local, grassfed, beef ribeye bulgogi and free range Fraser Valley marinated, braised and barbecued pork are piled on small hand-made corn tacos along with assertive condiments and fresh hits of salsas and kimchi. The layers of flavours come together beautifully. I didn’t try the organic tofu and mushroom taco.

East side of Howe St., south of Cordova

What’s it got going for it? Big whopper portions. It’s not entirely dim sum. My combo plate of shrimp dumplings, pork dumplings, chow mein and veggies was piled high with so-so Chinese food and I doled more than half of it out to a colleague.

Southwest corner of Granville at Robson

Bite me! the food commands. The food made is with excellent ingredients. I tried the oyster po’ boy and the venison burger. Loved, loved the po’ boy but felt the venison burger needed fat or some sensuously tart relish. Wish I could have gourmandized on the northern coho burger too.

West Georgia St., south side, between Granville and Howe.

This is Hello Kitty food, cartoonish and childlike. A thin crepe, rolled into a cone, held sliced banana, Nutella, a custard and was capped with a mountain of whipped cream. It might have been fun if the crepe were cooked through and not floppy. I recently saw a sit-down restaurant in Montreal selling these eccentric crepes.  Being seated might have helped.

Granville St., north of Georgia St. on west side

One visit, one very good item and one I’d rather forget. The Bangkok beef salad was delicious and very fresh, considering the circumstances. A burrito, however, was pre-made, wrapped in plastic and one step away from mush. A four-berry shake was delicious but not so, a chocolate protein drink which tasted too strongly of whey.

I like mt croissants nice and simple. A little butter, a little jam, c’est tout! So really, I was not the right candidate for croissants filled with ice cream (albeit with interesting flavours like black sesame and matcha) or turkey, mashed potatoes and cranberry sauce. The croissants, however, are crisp, flaky, and tasty.

“Forget sausages, go for the balls” the vendors T-shirts say. The Asian “balls,” both meat and fish, might be a little exotic for some, but I liked them.

There are six mix’n’match sauces to drizzle over them. I also like the sunny disposition of the vendors, a brother and sister team.

Burrard St., north of Georgia on the west side

Ragazzi pizza (with eat-in location at 2996 E. 22nd Ave.) is more finely prepared than the $1.50 per slice jobbies you might find downtown but I  my prosciutto and mushroom pizza needed a blast of flavour. That was the job of the prosciutto but it was a wimp.

North side of Hornby St., south of Georgia.

The pulled pork sandwich is juicy, vibrant with flavour, slow-braised and barbecued by a champ. A second cart just opened at Broadway and Granville and you can try barbecued ribs at that one.

West Georgia St., north side, between Burrard and Thurlow

The food rocks. I especially love the Chinese pork bun sliders and Korean short-rib tacos. Asian duck confit salad had everything going for it but my portion was oversalted. I haven’t tried the chicken karaage yet.

Chicken shwarma with Indonesian peanut sauce, rice and veggies added up to a hefty meal. The chicken was moist and tender and quite satisfying. You can also get pork or tofu.

The sausages (German, Italian and Greek on the day I visited) are made by a fifth generation German sausage maker and they’re very good. I think they deserve a better mustard than the French’s style that’s offered. The hefty sausage and dense bun made for a chewy lunch. There’s potato knish on offer too but I found it too soft and mushy.