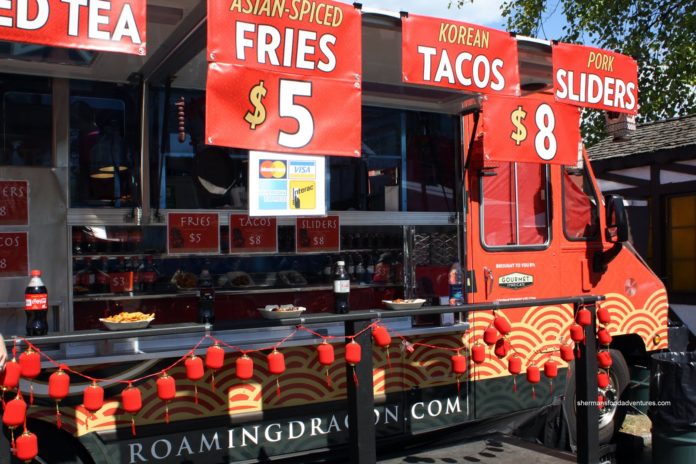 Los Angeles is crawling with them, and Portland, too. Street food carts and trucks are all the rage in major North American cities and Vancouver’s finally caught the fever.

The 2010 Olympics unleashed the yearning. The 90-minute lineups at Japadog street carts were a yardstick of the public’s growing burning hunger for good street food in Vancouver.

City councillor Heather Deal jumped aboard the street food bandwagon in the aftermath of that party.

“There were significant comments,” say Deal, who made the motion in council to expand street foods from the hotdogs and chestnuts rut. “I travel a fair amount. I looked around and thought, why just hotdogs in Vancouver of all places? Once the engineering and health departments started talking, she says, “the world opened up.”

And last July, Vancouver unveiled its pilot street food program, green-lighting 17 locations for food carts and trucks. Finally! There was some disappointment as vendors trundled onto the streets in fits and starts, many missing the summer season. But now, most are up and running with the majority of them clustered in the dense downtown core.

By the end of November, a report to council will make recommendations for the next chapter. It will include additional locations and improvements to the permit granting process, as the initial open lottery system came under criticism.

“Maybe there’ll be a lottery after a pre-selection,” Deal says. “We were just overwhelmed with applications last year. We want it to be good food, we want it to be lively but we don’t want to get so process-laden that people who are starting out can’t make it through the process.”

The street food scene went viral in North America following the recent recession, particularly in the U.S. In cities like Los Angeles (which has about 9,000 food trucks and carts) and Portland (with close to 600 trucks and carts) chefs found themselves jobless and the dining public was hurting, too. (In L.A. the county introduced a system to assign letter grades summing up health inspections of the roaming food trucks.)

“It’s different in Vancouver,” says James Tabbert. The film industry copywriter and set designer started www.vancouverstreeteats.com as a go-to site for information on the various carts and trucks.

“In Vancouver, people were not losing jobs and restaurants weren’t closing. [Vendors] made a free choice and are defined by a passion for food, food that’s not filtered through management and owners.”

Tabbert, a street food devotee, started the website because he doesn’t want failure.

“I’m trying to do everything I can to make people aware of what’s out there and provide links to online reviews. It would be great for Vancouver to be known as THE foodie destination for everything from street food to the fanciest of restaurants.”

His L.A. counterpart, Ross Resnick, runs www.roaminghunger.com, which gives out instant online messages on where the trucks will be. The fleet of L.A. food trucks, true to its car culture, move around during the day, tweeting and posting info on where they will be, given the two-hour parking restrictions.

“We’re there on a daily basis so there’s no rush to catch us. It’s more like a restaurant,” he says.

Roaming Dragon pays about $1,000 a month for the two metered parking spots reserved for the truck on Georgia Street. Vendors with their carts on street corners pay about $1,100 to $1,200 per year. Startup carts can cost from $10,000 to $20,000. Other costs include permits, insurance, commissary rental as well as salaries.

Says Resnick: “The movement is built on the backs of eaters and they have to support it; they’re the catalyst for the movement. It’s a bottom-up campaign.” Like many street food aficionados, he thinks a street food scene changes the city culture. “The guard goes down, people talk to one another and something interesting happens. It’s a feeling of community.”

True enough, when I was in San Francisco last summer, while I stood in line at Spencer on the Go, a truck serving really good French bistro food, I chatted with a woman from Germany, travelling on her own — something we’d never have done had we been in a restaurant. The lottery system that determined who got a spot on Vancouver streets had its share of critics but Apple thinks the city has done a “fantastic job” so far.

“In a perfect world, the lottery is not the way to do it but I understand the challenge,” he says. “So we make lemonade out of lemons. Some people have been very creative about how to work within the system.”

Winter weather worries him. “We know on a rainy day, business is down but you have to adapt or die.” They’re looking at offering deliveries to nearby offices in bento boxes as one way to tackle winter.

He and his partners are still tweaking the business. “It’s a balance between quality and quantity. For lunch, people want the “thud” effect. They put lunch down on the desk and it goes “thud.” That’s different from a snack on the street.”

Grant Woff, acting manager for Vancouver’s streets administration branch, says “his sense” is that there will be an additional 10 permits in the next year. “It depends on finding locations and meeting certain conditions,” he says. “It takes a bit of work in determining this.”

Tabbert hopes the city maintains a hands-off approach. Compared to Toronto’s street cart program, Vancouver looks awesome, he says. “Toronto forced people to buy uniform-look carts through a specific vendor, the fees were high, the process was restrictive, it was a top-down approach and there were a lot of bankruptcies. It was a mess and there are only 10 vendors left out of 30.”

The biggest failure of the Vancouver experience so far, he feels, is that the city gave vendors only three weeks to the July 31 opening. “It was impossible and they rushed people who didn’t know if they had the capital in place and had to get all sorts of approvals.”

“The report going to council,” Deal says, “will expand the scope of the program. It will partner with farms and promote local ingredients. The food on the streets of Vancouver should be reflective of the people who live here. That’s the ultimate goal. It should enliven and engage people on the streets, encourage people to talk to each other and make for an interesting landscape.”