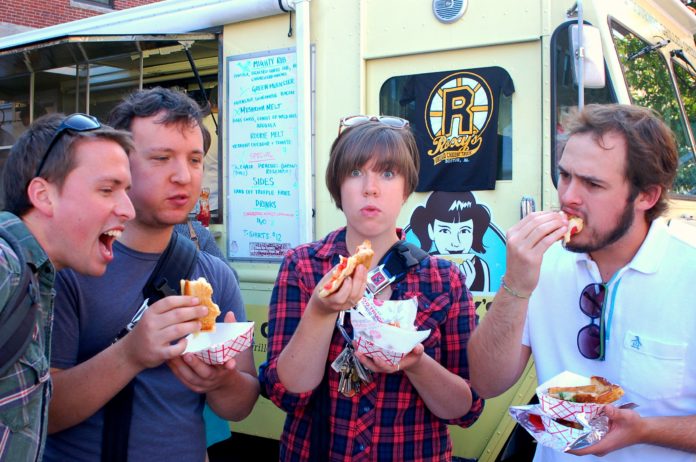 When James and Mike DiSabatino and Marc Melanson’s dream of opening a restaurant turned out to be a bit out of reach, the partners weren’t deterred. They simply turned to something a bit more mobile.

“We thought a food truck would be a good way to fundraise and build our brand in the most…organic way possible” said James DiSabatino. “People would get to meet us [and] see what we were all about, while [we were] still making money and working toward our main goal of opening a restaurant.”

Two years ago, 22 years old and fresh out of Emerson College, DiSabatino couldn’t have imagined what was ahead for Roxy’s Grilled Cheese. Since opening in March 2011, the truck and its owners have developed a hearty following and made it to the final three competitors on the second season of Food Network’s The Great Food Truck Race. But it hasn’t always been smooth sailing (driving?).

Before the City of Boston introduced their “Wicked Good Food” campaign, which provides 15 locations between which the city’s food trucks can rotate — with more in the works for next year— Roxy’s obtained the only license that fit their business: a Parks and Recreation Department permit that allowed them to operate — stationary — in Cleveland Circle.

It wasn’t the ideal place nor the ideal situation for a restaurant on wheels, DiSabatino said, “but I took a leap of faith.” When “Wicked Good Food” was announced, the Roxy’s guys jumped all over it, and the turnaround was quick. They submitted their applications in May, had their application approved in July, and have been on the move ever since.

“It’s kind of boring,” DiSabatino said of the whole application process. According to the city’s website, prospective food truck entrepreneurs will need a list of proposed vending locations and times, a health permit, a commonwealth-issued hawkers/peddlers license, and a GPS contract through Trimble, Boston’s partner on the project. If applicable, trucks also need a fire permit through the Boston Fire Department. Vending on private property? Don’t forget your lease, Use of Premise permit, and photo for each site.

The application fee is $500, which may seem steep at first. But when you consider the brick-and-mortar alternative — for example, the South End Buttery, which cost $850,000 to open — those permit fees don’t look so bad. But there may also be some unexpected and unique-to-food-truck challenges along the way. Recently, the Roxy’s team ran into a speed bump when the truck’s generator called it quits, shutting them down for a day and a half. “The generator is the brain, and the truck is the body,” DiSabatino wrote on the Roxy’s blog. “Without it, our operation isn’t really possible.” The truck’s Twitter feed, usually used to keep hungry customers updated on their whereabouts, became a play-by-play on the generator issue.

“It’s like opening a restaurant except 20 times more difficult,” DiSabatino said, adopting a serious tone and speaking candidly about the “all-encompassing” aspect of the business. “You won’t pay as much in overhead, but you’ll make up for it in aggravation. You’ve got to have a lot of patience. You won’t have time to do much else.”

And you’ve got to sell unique foodthat doesn’t taste like it just came off a truck, DiSabatino said. Innovation and creativity are important, but it’s the quality that keeps a truck’s windows open until the dry erase board reads “SOLD OUT.”