A new generation of lunch trucks is hitting the streets. They serve high-end fare such as grass-fed beef hamburgers, escargot and crème brûlée. As they rove cities like Austin, New York, San Francisco and Los Angeles, they alert customers to their locations using Twitter and Facebook. Their owners include highly trained chefs and well-known restaurateurs.

We sampled the food at 10 lunch trucks around the country that serve gourmet fare, from braised skate cheeks to bread pudding. One thing we learned: If a truck is famous for a particular item or dish, order that — and skip the rest. Here are the results of our coast-to coast review. 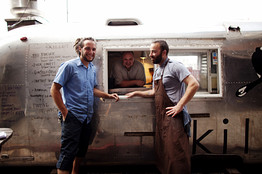 Joshua Henderson, 36, trained as a chef at the Culinary Institute of America and cooked at the Avalon Hotel in Beverly Hills. Today, he owns two lunch trucks that drive the streets of Seattle. Each truck serves about 200 lunches every day, and Mr. Henderson says he grossed about $400,000 last year, his first year in business, with only one truck in operation. The only problem: “We go up against the stigma. We’re trying to prove we’re on a different level than a lunch truck,” he says.

Lunch trucks once represented the nadir of culinary achievement, conjuring up images of withered hot dogs and hygienically-challenged kebabs. Today, even some chefs from Michelin-starred eateries are migrating into a sector of the food business that seems particularly well suited for a financial downturn. For would-be restaurateurs, launching a culinary truck requires far less start-up capital than a brick-and-mortar restaurant. At a time when consumers are cutting back on restaurant spending, a food truck serving inexpensive lunches and snacks can be an easier sell to diners.

Though most of these trucks charge more than typical hot dog or taco trucks, their meals generally cost less than comparable sit-down restaurant fare. At New York’s Rickshaw Dumpling Truck—whose dumpling recipes were created by Anita Lo, chef at the Michelin-starred Manhattan restaurant Annisa—an order of six duck dumplings with dipping sauce costs $6.50. In San Francisco, a skewer of escargot in puffed pastry costs $2 at the Spencer on the Go truck, operated by chef Laurent Katgely, who also owns Chez Spencer, an upscale French restaurant. 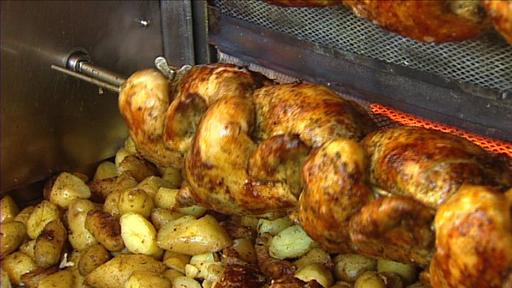 Fancier food on lunch trucks doesn’t necessarily mean better food, and old-fashioned taco and kebab trucks often have delicious fare and loyal fans. In Los Angeles, an organization called “Save Our Taco Trucks” launched in March last year to support Mexican-food street vendors who were battling new regulations that made operating in some parts of the city more difficult.

Some newcomers says this passion for street food attracted them to the business. Jesse Vendley, a 40-year-old originally from Calexico, Calif., a city bordering Mexico, used to work as an advertising copywriter in New York. His friends often raved about the hometown dishes he cooked, particularly his carne asada, made with skirt steak marinated in lime juice, garlic, spices and onions, then cooked on a hot grill. In early 2006, Mr. Vendley attempted to raise money to open a restaurant, but found little success.

Then he attended the Vendy Awards, a competition for street vendors. The quality of food, and energy of the fans, “inspired me,” says Mr. Vendley, who soon after launched a lunch cart in Soho. Today, Calexico Carne Asada has two carts, which he owns with his two brothers and Peter Oleyer, formerly a cook at Manhattan’s Cru restaurant. Later this month, the team plans to open its first restaurant, in Brooklyn.

The new trucks are rolling in as many restaurants report steep declines in their lunchtime traffic. Businesses from fast-food chains to upscale steak houses have rolled out cheaper lunch menus to try to persuade consumers to spend money during the work day.

Jeff Blank, chef and owner of Hudson’s on the Bend, in Austin, Texas, where the average check is $75, rolled out a lunch truck in March. The truck, called the Mighty Cone, specializes in fried chicken, shrimp and avocado coated with a mixture of almonds, sesame seeds, cornflakes and chili flakes; average checks are under $10. At Hudson’s, revenue is off by 20% to 25% compared with two years ago, Mr. Blank says, but revenues from the truck have made up for those losses and even allowed him to hire extra staff. 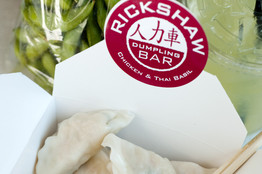 In spite of the softening of commercial real-estate prices , the costs of opening a sit-down restaurant are still too daunting for many would-be restaurateurs. Kenny Lao says that last summer, when he was looking for a midtown Manhattan location for a second branch of his Rickshaw Dumpling Bar, in which Ms. Lo is a partner, he was discouraged after encountering prices of $200 to $300 per square foot. That led him to launch the Rickshaw Dumpling Truck, which cost $150,000 to become fully operational.

For many chefs, the biggest barrier to entering the street-vending business is pride. Mr. Odermatt, originally from Switzerland, says that before starting his business in 2002, he was astonished to learn that Americans considered lunch trucks “roach coaches” and were often afraid of catching microbes from the food. In response, he created trucks that consumers could peer into and he sanitizes the trucks twice daily, Mr. Odermatt says.

One fan of Mr. Odermatt’s truck is chef Charles Phan, of San Francisco’s Slated Door fame, who likes the truck’s “really yummy” porchetta sandwich of roasted pork loin rolled into pork belly and sliced onto a French roll. He says the truck’s open design reminds him of street food in his home country, Vietnam. Mr. Phan says he is also in the early phases of planning his own lunch truck business, which would also allow consumers to observe the food.

Another major hazard of the business, newcomers say, is hostility—and even threats—from the competition. Mr. Lao says his entry into the industry was marked by threats and sabotage by other vendors, who parked their carts right in front of his sales window. 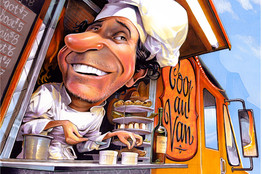 Permitting and parking also make the job tough: Each municipality has its own rules about where lunch trucks can park. In Seattle, street food vendors are only allowed to park on private property, whereas operators in other cities, including New York, can get a permit that allows them to park in most public parking spots. RoliRoti operates in seven counties around the Bay Area, and must pay for permits and follow different regulations in each one. Like restaurants, lunch trucks are inspected by city health departments. In New York, trucks are inspected once a year, and investigated if a complaint is lodged against them, says the New York City Department of Health.

New technology has been a game changer, allowing trucks to pick and move to where the customers are on short notice. Kogi BBQ, a truck serving Korean-barbecued meat inside Mexican-style tacos in Los Angeles, became a media sensation earlier this year in part for its use of Twitter, on which it currently has 28,000 followers. Following Kogi’s example, more truck operators have begun using Twitter to post messages on followers’ cell phones, alert customers of their whereabouts and even ask for tips on parking spaces.

In spite of the economic climate—or perhaps because of it—some new mobile lunch businesses are growing fast. On the Fly, in Washington D.C., sells organic, vegetarian or local ingredient-based versions of classic lunch-truck tacos and burgers. Michel Heitstuman, On the Fly’s chief executive officer, started the company in late 2007 with one café and one cart. Today, On the Fly operates eight carts, five cafes and a catering company, and is working on a franchising agreement to expand to other cities. Mr. Heitstuman says he recently ordered eight more of Chrysler’s electric GEM vehicles to keep up with demand. 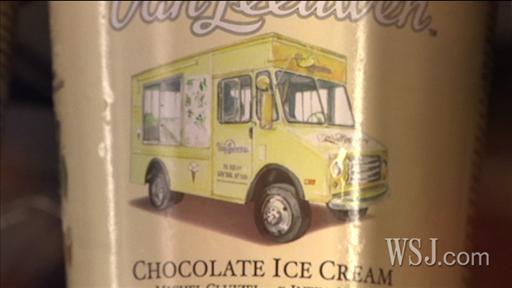 A successful start-up requires more than just a good idea. Kelsey Hubbard tracks how Ben Van Leeuwan took a stroke of inspiration and despite the recession, turned it into a successful ice cream company.

That’s when the economic climate caught up with him: Chrysler filed for bankruptcy April 30 and the independent agent helping to broker a deal for the new vehicles called to say that On the Fly would need to pay in cash to complete the deal. Jay Wik, a spokesman for Global Electric Motorcars, a division of Chrysler, said that GEM has made no change in its payment policy since the bankruptcy filing and does not require cash payments for vehicles. On the Fly and the agent are currently negotiating.

These tacos are among the most popular items at Calexico Carne Asada, which has two carts in New York City and plans to open a Brooklyn restaurant later this month. The company is co-owned by three brothers from Calexico, Calif., and a former cook at Cru, a Michelin-starred restaurant in Manhattan.

This version is slightly adapted from their recipe. If possible, marinate the meat for the full 24 hours to infuse it with maximum flavor. For a party, double or triple the recipe, put all the ingredients out on a table and let guests assemble their own tacos. 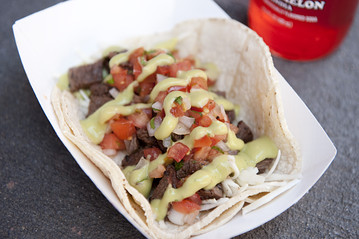 Put the first 10 ingredients into a medium bowl and whisk together. Pour into a gallon freezer bag, add the steak, press out any air and seal. Place bag into a large bowl and refrigerate, preferably 24 hours and no less than 6 hours. Agitate bag occasionally to distribute marinade evenly over meat.

Prepare a charcoal or gas grill, or heat a grill pan until very hot. Remove steak from marinade and pat dry with paper towels. Grill about 5 minutes per side, until desired doneness. Let stand 5 to 10 minutes before slicing thinly against the grain.

Open a clean, dry kitchen towel and place on kitchen counter. Place a fry pan over medium heat. Place one tortilla in pan and heat until pliable; flip and heat other side, then place in center of towel. Repeat with remaining tortillas, stacking them. Wrap the stack in the kitchen towel to keep warm.

To serve, place a few slices of meat in a tortilla and garnish with guacamole, pico de gallo and shredded cabbage.

Mix ingredients together in a small bowl. Season with salt and pepper to taste.

In a small bowl, mash avocado with a fork, then mix with other ingredients. Serve immediately. To store for a few hours, press a piece of plastic wrap down onto the surface of the guacamole and refrigerate.