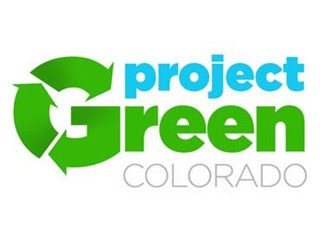 A hotdog vendor in Den

ver has cooked up more than a mouth-watering meal. Sergey Popov found a way to get rid of his utility bills and extension cords.

“I thought we have a lot of very sunny days in Colorado, maybe more than 300 per year,” Popov said.

It probably helps that the Russian immigrant has a degree in electrical engineering. He mounted four rectangular solar panels on the roof of his hotdog cart. The cluster generates up to 25 volts depending on the weather. Next, he installed both a controller unit and an inverter.

With the system fully connected, Popov can make full use of harnessing the sun. There’s enough alternative energy to light up his sign and illuminate his work area.

Sunshine also plays his music, turns his little cooling fan and even powers his water pump. 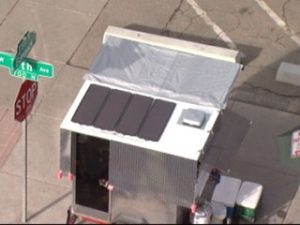 The only thing solar power won’t do is cook his beloved hotdogs. To get the heat he needs, Popov must do business the old fashioned way. Propane is used to power his cook stove. But everything else on his hot dog cart is run by the sun’s rays and customers appreciate it.

“I think the solar roof is genius,” said Geka Mezentsed as he picks up a steaming bratwurst. “He doesn’t have to plug it in anywhere. He can park it wherever he wants and the sun will just power it.”

Back in his homeland, Popov gave up a career in construction.

“I teach the Mongolian guys to work on bulldozer,” he recalled with a laugh.

Today, he’s glad to be his own boss selling hot dogs in Denver from the cart he converted to solar power.

On most weekdays, the solar powered hot dog cart can be found near the corner of 7th and Bannock.