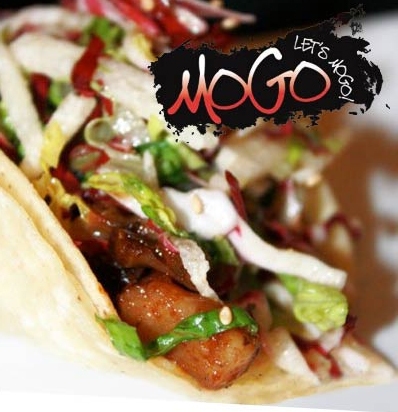 If there is a “truck zero” for the modern gourmet food truck trend, it would have to be a Los Angeles-based truck whose chef in 2008 got the brilliant, and slightly crazy (much like the first guy who put pineapple on a pizza), idea of putting Korean barbecued short ribs into a soft taco. Add to that a dash of viral marketing through Facebook and Twitter in one of the media capitals of the U.S. and you have the ingredients for a national trend, complete with its own reality show on the Food Network.

Here in Silicon Valley we have our own version of the Korean barbecue taco truck in the form of the just-over-a-year-old MoGo BBQ. Experiencing MoGo requires a visit to their website, Facebook page or Twitter feed to find out where they are parked on a particular day.

The two MoGo trucks make stops throughout Silicon Valley, as well as in San Francisco and the East Bay. The trucks are open for lunch and at night.

My first order was the item that started it all: the Korean short rib taco ($2). What I got was a very healthy portion of sliced short rib folded inside two warm corn tortillas and topped with a slaw of shredded lettuce and cabbages.

The short rib was well barbecued with crispy, crunchy end bits and juicy thumb-sized pieces mixed together. It had a spicy marinade that didn’t assault your sinuses the way spicy Mexican food does. Instead the heat just lingered in the back of your mouth, making its presence known throughout the meal.

If the heat is too much for you, MoGo offers an orange-colored “YoYo Sauce” whose sour cream base nicely mellows the heat of the short ribs.

MoGo also cooks up chicken, pork, tofu and, recently, sliced rib-eye steak as filling options for its tacos (as well as for its burritos and quesadillas). I tried the chicken taco as well. It had the same generous portion of meat that was also well grilled with plenty of well caramelized crispy ends. But the flavor, while not bad, just didn’t compare to the short rib.

The burritos ($7) are filled with a half pound of the meat of your choice plus the slaw, kimchi fried rice, a little cheese and a chipotle sauce. The burritos size is just about perfect. It filled me up without giving me the bloated feeling that the burrito from a certain high-end chain regularly does.

I didn’t get a lot of kimchi taste from the fried rice, and the sauce and the barbecued short rib dominated the palate, but the slaw gave the burrito a really nice crunch through every bite without overshadowing the meat.

The quesadilla ($4-$7 depending on filling) is a celebration of barbecued meat (or tofu, I’m sure, no judgments) with only enough cheese to hold the flour tortilla together. MoGo also has hot dogs ($5, $6 if you add bacon to it) and sliders ($6) that are topped with their sauce and slaw.

One caveat about MoGo: The trucks have a very strong following, to the point where 15- to 20-minute waits after you order your food are not uncommon, but the food is definitely worth it.

I had that confirmed on a chilly night in a Kohl’s parking lot on the El Camino. While I was waiting for my burrito, I saw a Santa Clara police officer pull up, get out of his car, order from MoGo, hand over his money and then stand around for 20 minutes until it was ready.

Now, I’ve been around cops my entire life and let me tell you: If a cop is willing to stand outside — on a January night — for food he had to pay for, then it’s got to be really tasty.