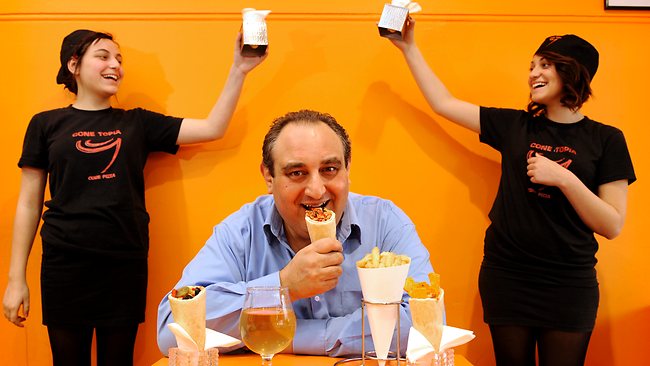 By Dianne Mattsson | The Advertiser

MOUTH-WATERING street food feeds the need and is catching on.

It’s a cosmopolitan, fresh and not-always-so-fast but mobile food thing that creates great atmosphere on the streets, but also feeds the need for good food truly on the go.

In Adelaide, the theme, if not the kitchen mobility, is catching on. While inadequate laws on roadside vendors and competition have hampered the likes of our iconic pie cart, the new van on the block is the mobile Burger Theory truck, housing a mini commercial kitchen and run on sheer street food passion by Dan Mendelson and Rob Dean.

The truck, affectionately named Pearl, is busy in catering mode, but the boys are still working things out with the Adelaide Council, and occasionally setting up their streetside-shop on private land in the city’s East End, only announcing Pearl’s arrival through Twitter and Facebook.

“We have a calendar on the website for when the truck sets up for semi-private events,” says Dan.

“Running the truck this way is more complex than you would think, but we are looking at adding some more items, like lamb burgers, to the menu.”

The burgers are prepared fresh, for now American-style with “Truck” sauce for $8 or gourmet Aussie with pancetta, onion confit and Adelaide Blue cheese sauce, $10, also vegetarian and vegan burritos and triple-choc cookies.

While cart-food suffers hurdles on our landscape, Norwood in particular seems to be a testing ground for a much broader mobile consumer, that is menu emanating from new hole-in-the-wall places serving up fresh food bundled so you can walk out of the door while taking the first bite.

Street Foods by SK, a new arm to the award-winning Spice Kitchen, has been tucked into a drop-in space just off The Parade, in Margaret St.

“We’re doing a special kind of cooking that can’t be replicated in a regular restaurant setting,” says owner Ragi Dey.

“The street food concept takes on different cultural influences. It replicates the foods you can buy at carts commonly found along the roadsides in India which don’t have all the restaurant trappings, so the food has to be cooked fresh, on the spot and it needs to be easy to eat.”

Ragi’s son, Chiragh, is the manager of the diner which is a giant departure from the family’s elegant Spice Kitchen. He insists street food is not to be confused with the modern perception of “junky fast food”. It’s “fresh, mainly locally-sourced food, fast curries rather than slow braises,” he says.

“We use things that can be cooked quickly, tender cuts of beef, chicken and vegetables, put together while you wait,” he says. “It’s also an all-day thing. We can be busiest from 2-4pm, which is exactly what street food is about no sitting down at meal time, but picking up food when you need something.”

Chef Jaswinder “Jassi” Singh could be mistaken for a pizza chef as he twirls Indian doughs into the air to quickly form a wrap which cooks in minutes in the tandoori oven.

His wonderful tandoori-baked and grilled breads envelop crisp salads and delicious Indian rubbed meats in wrap-style. Or, a must-try is an uthapam (pancake) lined with egg and filled with crisp salad and aromatic meat.

The menu offers a dozen versions of lassi, plus mulligatawny, a duck, potato and coconut fork-food number with lentils, plus popular

You can eat in but most prefer to dine on the go.

And, while traditional pizza slices might be considered walk-along food, Ric Catania, of the new Cone Topia, at 329 The Parade, Beulah Park, has made the flat meal even more portable. All the usual pizza toppings fit into his unique crusty dough cones, nice and tidy for any strolling supper.

“We make savoury cones from a yeast-free blend of flours,” says Ric. “You can have them filled with a huge range of ingredients, which are sourced fresh and locally.

“The most popular is the CT Special, which is a pizza cone filled with ham, mozzarella, bacon, onion, capsicum, olives, mushrooms and pizza sauce.

“But there are many more options like butter chicken and rice, yiros, Moroccan chicken, barbecue chicken, even ham and pineapple if you like.”

Ric, an Italian who was brought up in Adelaide, opened Cone Topia six months ago in Beulah Park, an extension of a successful business he started about 12 years ago, and still operates, in Bologna, in Italy.

“It’s a savoury extension of the ice-cream cones and waffle cones we all love, and which we sell as well,” he says.