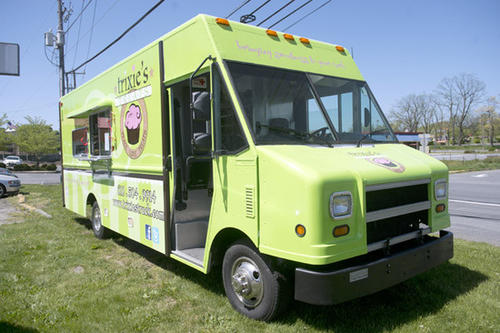 By Kathy Lauer-Williams |  The Morning Call

Cupcake trucks are popping up in the valley

There’s no doubt cupcakes are all the rage.

Cupcake bakers are popping up all over, including in the Lehigh Valley where ArtsQuest’s first Cupcake Bowl drew 15 area bakeries and caterers. There a television show — Food Network‘s “Cupcake Wars” — devoted to the treats, and in cities like New York and Philadelphia, cupcake trucks have been cruising the streets since 2009.

The Lehigh Valley now has, not one, but at least two mobile cupcake vendors.

“Allentown is finally a real city,” she says. “There’s a food truck.”

Karri Schreppel of Emmaus has been parking her cupcake cart weekends at The Creamery in Emmaus.

“I’m getting a great reaction with my cart,” she says. “I just worry I’m going to sell out.”

Both women use Facebook and other social media to let fans know where they will be parked.

Mathews calls her business Trixie’s Treats. (She got the nickname Trixie when she worked as a waitress at P.J. Whelihan’s.)

“Everyone loves cupcakes,” Mathews says. “Moms are my biggest fans. I have followers.”

Mathews comes from a long line of bakers. Her great-grandmother was a chef for wealthy families from the 1930s through the 1950s in a castle in Austria, she says. Mathews learned from her mom as she was growing up.

“We would always find ourselves in the kitchen,” she says. “I was always making stuff for parties.”

Friends would tell her she should bake as a career. She would sometimes get up at 4 a.m to bake before going to work at Lehigh Valley Hospital. “It was then that I decided this is something I want to pursue further,” she says.

She looked at store locations, but prices were too high. Her sister who lives in Philadelphia suggested a cupcake truck.

So Mathews bought a truck she customized with ovens, a refrigerator and sinks. She painted it green because she’s not a “pink” person. The first time she took it out to gas it up, she got an immediate reaction.

“Someone saw it and called me right away for a party,” she says.

Mathews discovered rules for mobile food trucks in Allentown are complicated. “I am navigating through the ordinances,” she says.

What works best, she says, is taking the truck to events and being invited by a business so she can park the truck in a parking lot.

The truck has drawn lines when it’s been parked in front of Home and Planet during Bethlehem’s First Friday and in the parking lot at Allentown’s Cali Burrito.

Mathews still gets up at 4 a.m. to bake, but has cut her hours to part time at the hospital.

Her most popular cupcake is Banana Fluffernutter, which won an award at ArtsQuest’s Cupcake Bowl. She make more than 20 varieties and often comes up with new flavors for special events. For Cinco de Mayo, she created chocolate chipotle and mango jalapeno cupcakes. Other popular flavors are lemon berry, strawberries and cream, vanilla bean and chocolate peanut butter.

She also occasionally makes chocolate-covered pretzels, cheesecakes she sells in slices and peanut rolled balls (similar to eggs), which she calls Trixie Truffles. “Those are a big hit because you usually can only get them at Easter,” she says.

She is operating just on weekends, but hopes to be out during the midweek, too, when summer starts.

Schreppel worked on a food truck with her sister for three years, going to fairs and festivals in Chester County. Last August, she decided to bring mobile cupcakes to Emmaus.

“I always wanted to work for myself,” she says. “When I was 17, I had to do a business plan for school and I wanted to buy a coffee truck. I’ve always had that entrepreneurial spirit.”

She says she likes the creativity of making cupcakes. “It’s like creating a little art form,” she says.

While she can bake cupcakes in the food trailer, Schreppel makes most of her baked goods in her sister’s kitchen, which has been certified for commercial baking.

“I have a small convection oven in the cart, but I can only make 24 at a time,” she says.

Chocolate is her biggest seller, although she also sells a lot of berry and lemon-based cupcakes. She occasionally makes a series of what she calls “adult” flavors such as Drunken Monkey, made with banana liqueur, and Irish Buzz, made with Bailey’s Irish Cream. She lists more than 25 varieties, and plans to make gluten-free and vegan varieties.

She sometimes makes miniature pies and brownies but “the main thing is cupcakes.”

Like Mathews, Schreppel mostly parks her cart at events and at businesses that have invited her. She will be at the Emmaus Farmers Market every Sunday, and plans to stay in the Emmaus area (including at Macungie‘s Farmers Market and Emmaus summer concert series in Community Park).

She also has the cart available for parties, and does “cupcake breaks” at workplaces.

•What: Tracey Mathews of South Whitehall Township takes her truck to festivals and events in the Allentown area.

•Where to find her this week:

•What: Karri Schreppel of Emmaus has a pull-behind cart that she takes to primarily Emmaus area events and locations.

•Where to find her weekly: