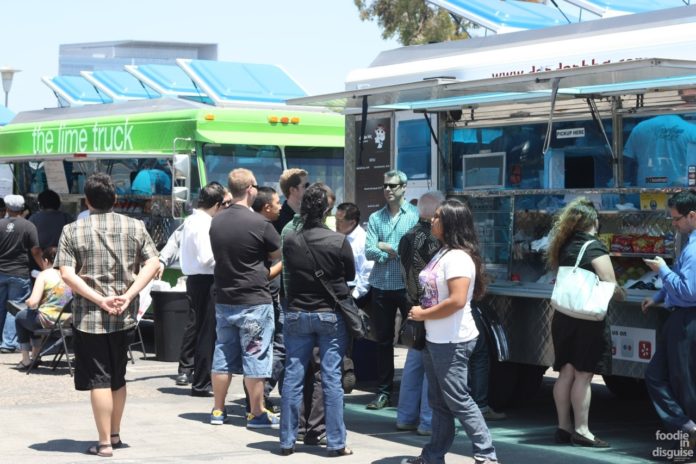 The culinary offerings will expand in Alpharetta next month as the city begins a weekly food truck series downtown on Old Roswell Street.

“Trucks will be lined all the way down the street there,” said Terry Hall, of food truck organization Fork in the Road, who has partnered with the city for the inaugural series.

“We’ll have everything from fresh, natural, local and organic cuisine to southwestern, Venezuelan, Puerto Rican, cheese steaks, meatballs, cupcakes [and] gelato. There really is going to be a very big product offering for people to come sample and taste.”

The Alpharetta Food Truck Alley will kick off April 11. About six to eight food trucks and live music will be featured on Thursday nights from 5 to 9 p.m. through June 27, with the exception of May 9.

The events will serve as a way of encouraging residents and visitors downtown. The first event will precede a big weekend for the city with the Alpharetta Arts StreetFest and the start of the Alpharetta Farmer’s Market.

“There’s been a laser focus … to get a great and vibrant downtown. This is a method to get there,” Mayor David Belle Isle said during last week’s city council meeting when he and the council approved for the food truck series to be expanded from four nights to 11.

“Mayor and council have approved it through June, kind of like a trial run to see how the community receives the event and see how well it goes,” said the city’s special events manager Kim Dodson.

Hall said if things go similarly to the food truck events held in Alpharetta late last year, the Food Truck Alley should be a success.

“We’ve done two other events with the city — the Vintage Corks and Gourmet Trucks and the Christmas tree lighting — and they were extremely well attended,” he said.

Dodson said the strong public interest in the Vintage Corks and Gourmet Trucks event in November spurred the idea for the new food truck series.

Hall said, “This private/public partnership works very well in the sense that we’re able to market the city as an attraction and bring a dynamic food offering into the city that draws people back down into the heart of it.”

Each week, the line-up of food trucks downtown will change as the different trucks present will rotate regularly. Hall said the organizers will tap into public feedback to decide which trucks will be featured.