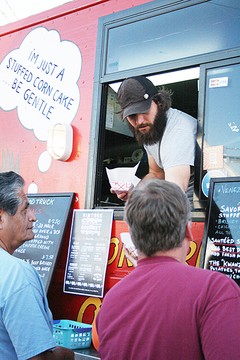 By Contributor | Root in Alpharetta

I wrote this article for the Revue & News and was in the paper this week. Alpharetta’s Council will again take up this issue Monday. What do you think of the city spending money to bring food trucks to town? I believe the event could be self-supporting in a short time. Keep in mind that local restaurants who want to participate in Taste of Alpharetta has to pay a fee (and no food trucks are allowed). But under the previous food truck proposal, the trucks would pay nothing at all to come on Thursdays. Doesn’t seem congruent.

Two weeks ago I had lunch at a food truck. I feasted on a burger made with grass-fed short rib beef and cooked on a big green egg smoker. It had a sweet onion chutney that contrasted an ancho chili dressing. I paired it up with some truffle oil french fries and a cold drink. Are you getting hungry?

This truck was right here in Alpharetta. They docked next to an office park along North Point and peddled their grub to hungry cubicle dwellers like yours truly. And you know the best part of it? No one subsidized this truck’s visit.

That word, subsidized, seems to be a sticking point.

Alpharetta wants to create a Thursday night food truck event in downtown. It would be modeled after a similar event in the city of Smyrna, something that’s proven to be a wildly successfully for that city. No one seems to doubt that the same would be true in Alpharetta. Suburban gastronomes are hungry for food trucks!

But should Alpharetta spend tax dollars to subsidize out-of-town food and alcohol venders? It’s a valid concern. The first proposal would spend $78,000 to make it happen.

On one hand you have Council members who are laser-focused on reviving Alpharetta’s pitiful downtown scene. A food truck event would certainly help. Contrast that with a Council that’s been extremely pro-business for decades. Now we’re at an impasse.

The solution is to allow more local businesses into the mix. Let wine shops or growler stores take turns serving alcohol at these events. Two local wine vendors poured at last November’s Vintage Corks and Gourmet Trucks event. Let’s follow that model. Or how about letting restaurants operate a few tents among the food trucks? And there’s no reason this event couldn’t become financially self-supporting once it gets going.

Smyrna’s City Council was deeply divided when they first approved their food truck event last year. At the end of season they unanimously agreed to extend the popular event into 2013. Alpharetta will find the same to be true if they can work out these last few kinks.

Hopefully you’ll find me downtown on Thursday nights this summer. I’ll be easy to spot. Look for the guy stuffing his face with Korean-fusion tacos.