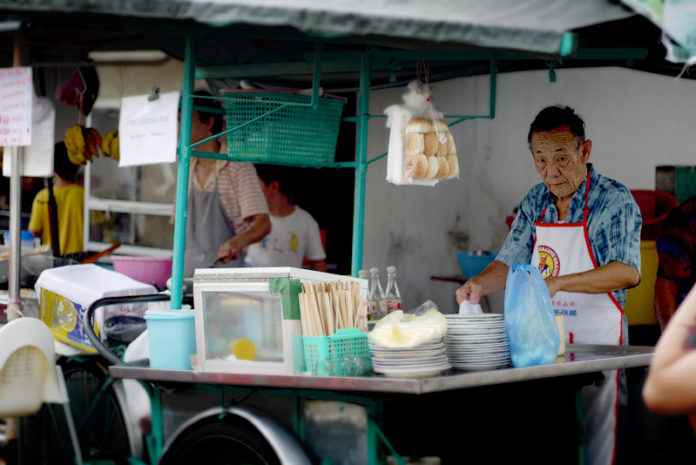 One of Penang’s most endearing qualities according to most Malaysians is its local cuisine, or more specifically, its local street food. Eating is an institution here, with opinions on where you can find the best of each dish as myriad as the island’s history. It is not uncommon to find people sitting around these open-air restaurants and hawker centres at all times of the day and night, eating, or simply enjoying the company of friends and talking rather animately in the local Hokkien dialect.

I’m really going to miss these <$3 meals when I get home to New Zealand. Over a period of a few days, we set out on a mission to try and conquer Penang’s infamous street food selection. Here are some favourites from the food tour.

The term “Hokkien Mee” refers to different dishes depending on which British Straits Settlement you find yourself in. In Singapore, it’s a wet stir-fried noodle dish made of egg noodles, bean sprouts and prawns. In Kuala Lumpur it’s a thick-noodled dish cooked in a dark soy sauce (otherwise known as “Black Mee”). In Penang however, it refers to a soup noodle dish that is served with prawn broth, egg, roast pork, pork bits, and other assorted items. This is a Penang signature dish, and whilst the ‘best’ is hotly contested, I personally prefer the one at Old Green House on Burma Road. You can also select what you want in your noodles – we chose instant noodles (Maggi Mee), roast pork, and soy egg.

The ubiquitous chicken rice. Pretty simple, really; roast chicken, served with rice, and a side of chilli sauce. The quality of the chicken is what varies and differs between stalls. There used to be a chain here called Fatty Loh’s that served great chicken rice, but for some reason we could not find it on this trip. There are also persistent rumours that the owners of successful chicken rice stores drive expensive cars such as Bentley GTs to their chicken rice stalls in the morning. Truth be told, I haven’t had much chicken rice on this trip – does anybody have any suggestions?

Rolled rice rolls, served with a sweet shrimp paste. This differs from the popular Cantonese version found at dim sum restaurants all over the world as it is served without soy sauce, and with the addition of the chili sauce and paste, which is all mixed together before eaten. According to my grandmother it is supposed to be unrolled before eaten, but I doubt many have the patience to do this.

Another Penang signature dish. I’m sure those who have ventured into a Malaysian restaurant will have encountered laksa at one point or another. The dish that most are familiar with however is referred to as “Curry Mee” here, whilst laksa is generally used for the dish above – Penang Assam Laksa. I’m still undecided whether this is an acquired taste. This Laksa, instead of using curry as its broth base, uses a sardine/fish broth, on top of which shrimp paste, chilli, pineapple chunks, fresh onions and cucumbers are added, giving it a very unique flavour; salty, sweet, and a little sour. I love Assam laksa, but I’ve also met people who can’t stand the sight of it. The best? I personally enjoy the Assam Laksa found on Penang Road, but rumour has it that the best one served on the island comes off a white lunch truck, which parks behind the Jelutong post office, but only in the afternoons. Could be an urban legend?

Taiwanese readers may recognize this dish – Or-Jian. Essentially it’s an oyster omelette; fried oysters with egg, a Fujian creation. Unlike Taiwan however it’s not one of those dishes where each restaurant boasts some kind of secret recipe. Still, worth a mention, since I rarely see this outside of Penang.

Pancakes, Penang style. This is a sweet dish that is normally cooked on the spot, where you get to choose a variety of fillings; sweet corn, brown sugar, bananas, peanuts, and more. Be careful of some street vendors selling this though, as we’ve had some rather disgusting ones too. Our favourite: the pancakes @ the Pulau Tikus Markets. . You might want to avoid asking what “Pulau Tikus” means until you leave though…

Mee Goreng is another staple dish in Malaysian cuisine. Translated, it simply means fried noodles. There are hundreds of variations of this, but here’s the one that we frequent the most. This variation is available in a dry (pictured) or a wet (with a type of curry/gravy) version, and features dried squid, bean sprouts, meat, along with a very unique sauce, garnished with fresh lime. You can find this on the start of Bangkok Lane (Lorong Bangkok).

A traditional Chinese dish, this quick meal comes in two versions; white, and dark. Although most are dark here in Penang, we loved this white Bah-Tsang at our friend’s deli. Glutinous rice, packed with pork, salted duck egg, and mushrooms. The bah-tsang’s fillings also change depending on where the chef may be from, as the dish differs from province to province in China.

Literally translated, this means “Meat Bone Tea”. This is an aromatic herbal soup which is normally served in a large pot, with various meats (and other such meat ‘parts’) in it. This particular restaurant near Jalan Seang Tek served the various parts (tripe, ribs, and so forth) in individual bowls, which I hadn’t seen before.

Perhaps the most hotly debated dish on Penang island. Char Koay Teow is to the locals what wine is to the French. A fried flat rice noodle dish with meats, bean sprouts, eggs, prawns, clams, pork and chili, you can probably find it on most street corners and in most restaurants, but as to which is the best is something locals here would argue to the point of fisticuffs. Lately however, this lady on Selamat Lane (Lorong Selamat) has been getting a lot of nods; evidenced by her ever increasing prices every year (now at RM9.00 for a dish). You’ll find her in her big red hat, and on some busy days, it can take upwards of 45minutes for your dish to be cooked and served; an eternity when your food normally arrives within 5 minutes of ordering. She runs a pretty tight ship though; you need to sit at her restaurant to be able to buy her dish (no takeaways), you can’t complain about the wait (otherwise you are asked to leave), and if you understand Hokkien, it’s rather amusing listening to her bark around her husband and kids during the busy periods. Her fresh ingredients, large prawns, and cooking method of using a charcoal stove and old wok however seem to make most agree that it’s worth the hassle.

Flat rice noodles, served in a beef broth and with slices of beef and other assorted ‘parts’. This dish is rather famous on Chulia St, in the middle of the old Georgetown area. I’m unsure if you can find it elsewhere on the island, but certainly worth the visit there. However, if you’re in a car, note that parking can be ridiculously hard to find in the area.

I have moral dilemmas as to whether I think this burger or In-N-Out burger ranks as the best burger I’ve ever eaten. Locals will no doubt be familiar with Ramly burger, a local burger franchise that serves a Malay-style burger, laden with mayonnaise, sweet chili sauce, and egg. This Burger Special at Tari Kafe, on the road towards Batu Ferringhi, takes the Malay burger to the next level. Soft toasted bun, just the right amount of sauce, and a beautiful texture between the egg-wrapped pattie and the crunchiness of the onion and salad filling. I could eat five of these in a row, given the chance.

Shaved ice desserts. Although certainly not exclusive to Penang, it is one of the cornerstone dishes of street food fare. Aside from syrup, there’s red bean, tapioca balls, ice cream, and other dressings that are added on top of the shaved ice. A very nice dish on a hot day… which seems to be every day here in the tropics.

I’m not sure if I’m entirely correct in saying this, but I think “Rojak” also means a “mess” in Malay slang. This dish, like many of the dishes above, exists in many forms, but in Penang it is served with fresh fruits (green mango, guava, jambu, etc), topped with a thick, caramel-like shrimp paste. I know it sounds a little disgusting, but it tastes amazing, an absolutely unique flavour of its own as the fruits balance out the sticky shrimp paste. Each stall produces their own paste, and it differs in quality, texture, and taste. Our favourite stall is G.P. Soon Rojak in Gurney Park, the big hawker centre on Gurney Drive. Started by the father and now operated by the son, the wait can be as long as 30 minutes to order your plate of Rojak. Looking back at some of these dishes above, it’s interesting how they have combined certain flavours and palettes that you may never have thought would work together; something that they must have certainly accomplished over years of trial and error.