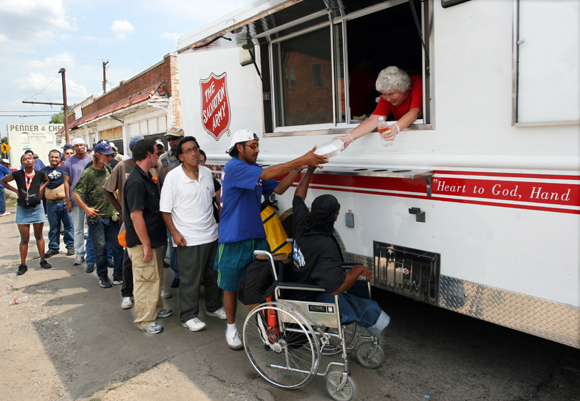 Bill Bradley, who heads the Asheville-based relief organization, fears the need could be even greater with Hurricane Irene.

With the huge storm hitting the coast, Bradley and a team planned to head east early this morning to figure out where help is most needed in what he anticipates will be one of the largest responses in the organization’s 20-year history.

“We’ll slow down about halfway and find out where it’s going to make landfall,” Bradley said. “Then we’ll go into the affected area and figure out where the best place is to set up logistically. There are a lot of things we have to look at to be able to set up in an area and make it functional.”

Bradley and other Hearts With Hands officials were already busy this week coordinating with volunteers and emergency officials along with churches, companies and other organizations willing donate supplies and their time.

Phillip Hughes, a longtime volunteer with the agency, drove a truck to Charlotte on Friday to pick up a load of donated canned goods.

“I just feel led to help people out,” said Hughes, 49, who owns a mobile home park. “You never know. One day it could be the other way around, and I might need the help.”

David McMahan, a veteran of numerous Hearts with Hands relief efforts, planned to be at the agency on Sand Hill Road today putting together boxes of relief supplies.

“If you’ve got a good volunteer base, it’s more priceless than gold,” said McMahan, 57, who works at the Ingles Markets warehouse in Black Mountain. “To me, a good volunteer looks out for other people. We know people are hurting all the time.”

Bradley said the bulk supplies are repackaged before being trucked to churches, fire departments and municipal buildings to the affected areas.

“The thing you always need the first few days is the bottled water,” he said. “They go through it extremely fast.”

Bradley said it will probably be Sunday afternoon or Monday morning after Irene passes before his agency and others start pouring supplies into hardest-hit areas. The effort could last for weeks.

The need for donated items is huge, he said. The agency was already low on supplies because of recent responses to tornado damage in other parts of the country.

“We know that folks here in Western North Carolina enjoy helping people,” Bradley said. “They are the most generous people in the world.”

The Salvation Army’s Asheville-based mobile kitchen also is headed to the coast. The unit will prepare 1,500-2,000 meals a day, with a deployment expected to last up to two weeks, the agency said.