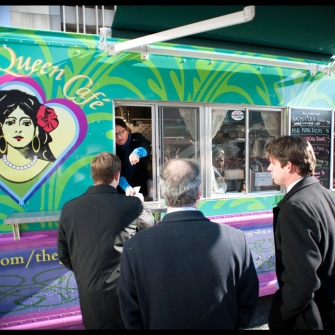 A meeting in the months-long debate over whether downtown Asheville should allow food trucks turned into an angry confrontation this morning at City Hall.

At issue is whether the city should allow food trucks in its central business district. Food-truck vendors say that they should be allowed to move in from the outskirts of town (where they are currently allowed to vend), while brick-and-mortar restaurant owners argue that the central business district should be free of the possible noise and clutter that they feel food trucks might bring.

City Council will eventually vote on the matter, but until then, the commission has been in research mode. At Friday’s meeting, a few dozen restaurant and business owners, along with other interested folks, met at City Hall to hear data from Downtown Association members on whether food trucks would be a positive addition to downtown.

The floor was open to comment from audience members. Some remarks were apparently heated, according to eyewitnesses (this reporter attended the first 90 minutes of the meeting, but editing duties called).

Suzy Phillips, who operates Gypsy Queen Cuisine Lebanese food out of a truck, asked that the process move ahead faster (the issue has been in discussion since last year, and many meetings have been called to discuss possible regulations should the vendors eventually be allowed to operate in the central business district).

In response to Downtown Commission Chair Dwight Butner’s assertion that food trucks did not have to adhere to the same inspections that restaurants do, Phillips said that in her two months of operation, she had been inspected — twice.

At some point, temperatures rose.

Anthony Cerrato of Fiore’s Ristorante Toscana requested that both sides of the issue speak with respect. Gabriel Shaffer, Suzy Phillip’s husband, took the stand at that point, and apologized for any earlier language on his part that may have been offensive.

Then Downtown Commission chairman Dwight Butner apparently erupted in anger at Shaffer (who admits that he has been “adversarial” throughout the process, according to eyewitnesses).

“Several folks from the different ‘camps’ talked about mutual respect, though no one named names,” says Minicozzi. “Gabriel walked up to the podium and basically owned it and apologized for anything that he may have said.”

Shaffer, says Minicozzi, admitted that he’s outraged by the length of time that it is taking for the issue to be resolved. “He made a great statement and then Dwight just — yelled. And it got uncomfortable in the room. I think it was Tim Peck who began yelling ‘point of order.’”

Peck, an Asheville local, unaffiliated with any of the vendors, had his own perspective. Here are his comments, as posted on BlogAsheville:

“Dwight Butner was called out of order for overriding the interim chairman’s instructions and then interrupting public comment to berate a member of the audience that he has issues with. His loud and hostile manner motivated someone to ask a police officer to move from the City Hall lobby to the meeting room back row. Another audience member and restaurant owner did the same thing during public comment and began berating Gabriel. I spoke up, saying, ‘You have to address the commission, not the audience.’

CLARIFICATION: Mr. Butner was not formally or vocally called out of order by the interim chair. This was a dereliction on her part but she was under duress (Butner had turned over chairmanship of this portion of the meeting to allow him the opportunity to engage in the general discussion as an interested member).

Butner WAS, however, out of order, in fact. The interim chair cautioned Butner as he began to speak during public comment, Butner loudly insisted that he would indeed speak, in explicit disregard for the chair’s caution, Butner began making heated comments directed at a member of the audience while jabbing the table with his pen, during which I called out ‘Objection!’ from the audience, twice, Butner stopped commenting and a police officer entered the room to sit in the back shortly thereafter. When the agenda item was concluded, the officer left the chamber.”

“I don’t have long to update, need to get to work, so this will be very very brief. Today’s meeting was heated, but, I feel, productive. Despite the fact that some of the concerned parties repeated arguments that have been talked to death, it is obvious this is going to happen. It’s just a questions of how and when. Most of the commission members are behind this. Public opinion for it is just too strong.

The most interesting moment for me, was when I was accused by Michel from Bouchon of ‘trash talking,’ which has nothing to do with policy. Then Dwight chimed in that I had been ‘threatening’ his wife online, which I’m still trying to figure out what he’s talking about.

Although I have been very adversarial throughout, I have never made threats. Mr. Butner went so far as to raise his voice and yell, while pounding the table in anger. All I heard in my head was the sound of monks chanting, well aware that the more he lost his temper, the better off we were.

This was probably the best thing he could have done for us at this meeting by demonstrating his emotional attachment to the issue. I would say that when an opponent’s only option is to start complaining about trash talking, they are involved in a losing battle.

However, my days of playing bad cop with this issue are over. The work has been done on my part, it’s going to happen, no matter how much kicking and screaming from the opponents.

All power to the pita!”

Minicozzi says that he’s surprised by Butner’s reaction. “I don’t know what happened to elicit that response.” Still, Butner has worked hard to help build downtown. “From Dwight’s perspective, he’s exercising democracy,” Minicozzi says. “We are a government for the people and by the people — he’s putting himself in positions to have influence. He is a downtown resident, business owner and restaurateur, so the way he sees it, he’s three times invested in downtown.” For that reason, says Minicozzi, he’s passionate about the downtown district.

Jimi Rentz, owner of Barley’s Taproom and Pizzeria, is equally surprised by Butner’s outburst. “That’s unusual for Dwight,” he says. “Obviously, there must have been something there, something tangible to make him that upset, though I’m not sure what it was. He’s an agreeable guy — of course, he’s opinionated as hell, but who isn’t.”

Though Rentz agrees that frustration over the length of time it’s taking to resolve the issue is understandable, the process, he says, is in place for a reason. “The commissioners are going to go over every aspect that they can think of concerning these food trucks,” he says. “The ordinance that prohibits food trucks was put on the books 25 years ago to make sure that the historic buildings in downtown Asheville stayed full of tenants.”

Earlier discussion at the meeting included a presentation by the Asheville Downtown Association with feedback from Asheville visitors, residents and stake-holders surveyed about the issue.

The data show that Asheville Downtown Association members are split about 50-50 on the matter. When combined with feedback from everyone else surveyed (out of a total of 664 responses), approximately 75 percent of those surveyed thought that food trucks would be a positive addition to downtown.