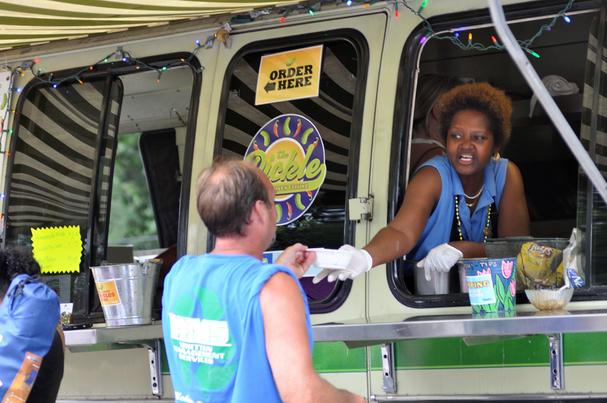 Follow that food truck. Whether it’s up the street, over at the farmers market or on Twitter and Facebook, there’s a bumper crop of cooks serving meals from mobile kitchens this summer.

“It’s like we had pressure on the dam, and it burst,” said Greg Smith, president of the Atlanta Street Food Coalition. It started with King of Pops carts and the Yumbii truck, and now we’ve got at least 10 trucks fully permitted by the health department.”

A survey out this week by the market research firm Technomic Inc. found that 91 percent of folks familiar with food trucks say the trend is here to stay. The biggest reason nonusers of food trucks cited for not frequenting a mobile cart was hesitation over buying food from a vehicle. Certainly food safety and proper permitting are big concerns.

“Everyone’s required to operate out of a commercial kitchen,” said Smith, who adds that area municipalities haven’t exactly made it easy for food truck owners to roll into their new businesses easily. “It’s extra complicated in the metro Atlanta area because we have so many municipalities with different methods of interpreting the health code. The city of Atlanta and the Fulton County Health Department are the ones we have worked with since we started. Marietta is taking initial steps to permit food trucks now.”

While many food trucks advertise daily locations on their websites, there’s an emerging trend in Atlanta to create food truck “pods” or gatherings of multiple mobile kitchens. You can find food trucks in Midtown on Mondays and Thursdays, at the Woodruff Arts Center and Atlantic Station on Fridays, and at the Buckhead Theatre on Thursday evenings.

Jenny Levison of Souper Jenny restaurant in Buckhead loads up her brightly colored “Incredible Flying Soupmobile” with soups, salads and sandwiches and takes her show on the road to food truck events. “It’s entertaining, and you can get all kinds of people to sample lots of food in one place.”

Not surprisingly, the Technomic survey found that location is vital to the success of food trucks, as more than half of consumers “just happen upon them.” Facebook and Twitter are key ingredients for marketing these mobile restaurants because 84 percent of heavy social media users visit food trucks once a week. “I think it’s really cool,” Smith said. “It brings people out and really taps into the power of community in Atlanta.”