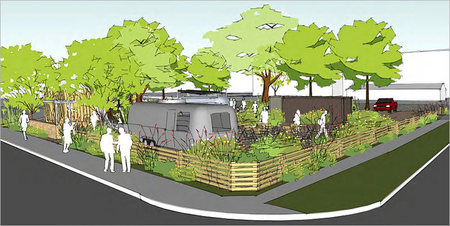 ATLANTA — Howell Mill Food Park night is everything Street Food promised it would be: good for the community, good for entrepreneurs, tolerated by area businesses.

“I like the adventure, it’s like camping,” Andrew Capron said with a wicked grin. He stood with his hands on his hips near his colorfully painted “Boners BBQ” food truck. “There’s definitely a movement, and it’s begun.”

John White remembers when the empty lot between Howell Mill and Emery was overgrown with weeds and trash. “I passed it every day on my way to work,” he said. “And it certainly wasn’t nice to look at.”

“We mowed it all down, covered it with woodchips and put in some picnic tables,” event organizer Brett Holtzclaw said. “And now, look at it.”

The foodies and families are surrounded by entrepreneurs in colorfully painted trucks (and one umbrella stand thanks to the King of Pops). The business possibilities have become so attractive; the Atlanta Street Food Coalition is holding a Street Food 101 workshop for entrepreneurs Saturday, Aug. 20.

Some have been at it for years. Capron got his first gigs three years ago working on movie sets. “They would hire me to feed the crew,” he said. “The street food movement has gone from zero miles an hour to 50 miles an hour.”

Some have been at it just a few weeks. The light blue Honeysuckle Gelato truck is the new kid on the block. “The next thing we knew, we started a food truck. It just kind of happened,” Wes Jones said before a tour of the ice cream truck stuffed with flavors like Moon Pie, Snacks on a Plane, and Lemon Basil.

Harrison Jones started Tex’s Tacos with a partner. The 27-year-old was quick to pull out inspection reports when he saw me inspecting his permits. The latest was marked with a 100. He, like other successful food trucks, talk about the extensive steps they’ve taken to work WITHIN Atlanta’s sometimes difficult and confusing ordinances.

“Sometimes I hear people say they want to keep us out of business, but that’s not it,” Jones said. “They want to make sure you can’t go around like a rouge food vendor with no idea who’s regulating what you’re doing.”

Capron seconded that idea, “The health department is your best asset.”

Each truck carries a variety of permits, but the GATHERING of food trucks sits firmly in the gray area. Atlanta City Councilman Kwanza Hall said technically, they’re only legal if it’s under a one-time special event permit or sponsored by a city council member.

Hall has proposed a new law that would make gathering on private property legal for food trucks under a set of rules they are already following.

“It’s been really hard to get it through all of the different health departments with City of Atlanta, Fulton County, State of Georgia, the police department,” he said. “So, we’re just trying to streamline this. Government should be for the people.”

The law goes before the Public Safety Committee on Aug. 30. If they approve it, it could go before the whole council the following Monday.

As the negotiations continue at City Hall, dinner continues at the Howell Mill Food Park.