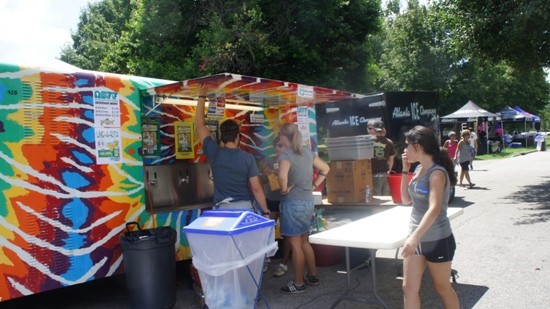 Saturday was the first Atlanta Street Food Festival. And while most visitors seemed to really enjoy the event at Piedmont Park, Midtown Atlanta, like most first things, it had a few issues.

The festival, hosted by Enchanted Events of Atlanta, brought together some of the best, new food trucks in the ATL. Despite forecasts of scattered thunderstorms, the rain mostly held off. Temperatures were in the low 90’s. While that’s toasty, it is better than the 100F+ temperatures of just a couple weeks ago. Lots of food trucks to choose from, plus specialty tents, vendors and live music.

Details for the event evolved over time. For example, initially the hours were 11a to 7p, which is why I arrived at 11:30a. I hung out in the shade with the early crowd, waiting for the trucks to open at the new time, noon to 8:30p. The biggest complaint was about the entrance fee. If you arrived at the Charles Allen and 10th Street entrance, you were charged a fee of $10.50. If you came from any other direction of the park, there was no entrance fee at all. The trucks were accessible from any direction and with no fencing. Some people had paid on-line, in advance. There were grumblings about it on Twitter.

Presumably, those who paid the entrance fee were supporting the Atlanta Community Food Bank, beneficiary of the festival. But there are lots of regular gatherings of food trucks, including the permanent Food Truck Park. None of them charge a fee to enter. As “Marc” commented on a Midtown Patch article about food trucks in Midtown. “So we have to pay $10.50 for the privilege of buying food at the same trucks that, weekly, we could buy the same food for the same prices without the admission fee [sic]? Am I missing something?”

Check out the slide show for lots of photos from the event.