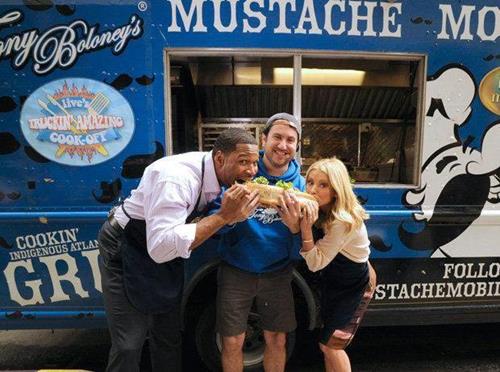 ATLANTIC CITY – Mike “the Butcher” Hauke of Tony Boloney’s Moustache Mobile has been in New York City since Thursday to prepare for the “Live with Michael and Kelly” Truckin’ Amazing Cook-off final 9 a.m. Friday, Aug. 2 on WPVI-TV 6.

Hauke of Atlantic City, will put his Moustache Mobile Cheesesteak Ole up against the pulled pork tacos by chefs Mario Bevilacqua and Catherine Graziosi from What the Fork of Scranton, Pa.

Hauke said his favorite part of the experience has been representing Atlantic City on the national stage.

“I am so jazzed up,” Hauke said Thursday, Aug. 1 in a telephone interview with The Downbeach Current. “The best part about it is. Everyone says to me, driving around Manhattan, on site and on the show, ‘Oh yeah, you’re like a New York, food truck, right?’ And I say, ‘No bro, I’m from Atlantic City.’ They look at me and say, ‘Really, South Jersey?’ I say, ‘Dude you don’t even know what’s going on down there.’”

Hauke said the Tony Boloney’s Facebook page has received a lot of positive comments in support of his quest to win the viewer-voted Truckin’ Amazing Cook-off and the $20,000 grand prize.

He won over Kelly Ripa and Michael Strahan when he introduced his “Indigenous Atlantic City Grub” in his televised demonstration of how to make the Cheesesteak Ole. Hauke said the finals be judged by three top celebrity chefs.

“Like top, world class, no joke; they’re going to be the ones choosing. Talk about pressure, but talk about an honor, these individuals are at the top of their craft,” Hauke said. “I’ve been making cheese all day long, pulling cheese in Manhattan on the ABC Studios set in one of their lots.”

He said his wife Jill and a friend are helping him prepare for the contest.

“We’re excited and we’re hopeful that we will do a good job. I know we’ll bring 150 percent, I’m not worried about that. But you never know what’s going to happen,” Hauke said. “We’re bringing our A-game. We are got our bread from Rando’s; he shipped it up to us fresh so got everything in line to produce top-notch Atlantic City grub.”

He said he has gotten calls from the governor’s office and the Atlantic City mayor’s office to wish him luck on Friday. Hauke said when someone asks, he is proud say both he and the Moustache Mobile are from Atlantic City.

“It’s just an honor we are able to have the opportunity to represent Atlantic City in a positive light,” Hauke said. “I think it will be good representation of Atlantic City. We are a brick and mortar shop, I’m a one man show. It’s awesome to have that in the national spotlight. It’s the most widely watched show in that time slot in the United States.”

Although he is in a finalist in a national food truck cook-off, Atlantic City does not allow the Moustache Mobile to serve customers in the city. Tony Boloney’s is located at 300 Oriental Ave.

“Hopefully, this will be a good catalyst for Atlantic City and getting them in gear to approve us to vend in Atlantic City,” said Hauke.

And hopefully, Hauke will win and stay true to his word.