By Josie Sexton  |  The Coloradoan

One of the draws of owning a certain type of 21st century restaurant is that you can take it with you.

Faced with a competitive market, and upon losing a coveted Fort Collins parking spot, one mobile restaurateur did just that.

He paid $3,500 to park his Nomad Street Cuisine trailer in the official SXSW SouthBites lot, along with 14 other national food truck operators also selected for the event. In nine days, he expects to sell between $30,000 and $50,000 worth of signature burgers, Reubens and other sandwiches. 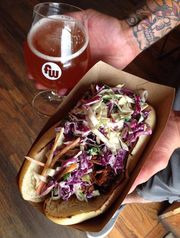 It would have taken him an entire year to sell that amount if he were parking regularly at the best locations in Fort Collins.

“I’m doing this to keep my business going,” Shepler said before opening Nomad in Austin on Friday.

The 28-year-old Culinary Institute of America graduate is used to traveling to cook. Before opening Nomad last March in Fort Collins, he had lived and worked in New York, Houston, Spain, Costa Rica and Durango.

Hoping to then roam around Colorado, he started his eponymous food truck, and for a while was serving lunch weekly at New Belgium Brewing.

With no kitchens of their own, the two largest breweries in town, New Belgium and Odell Brewing Co., are also two of the best guarantees for steady food truck business.

Shepler said he expected to make around $30,000 a year selling lunch weekly at New Belgium, but, he clarified: “You have to be there every week, and if you miss a day you get in trouble (financially).”

Since he opened Nomad a year ago, a dozen more food trucks have opened in Northern Colorado, bringing the competition to around 40 mobile operators, according to the city records. Recently, Shepler lost his weekly spot at New Belgium because of rising competition.

“And I didn’t know what to do. All the food trucks that open in Fort Collins think that the breweries are what’s going to make them successful,” he said. “Once you get into it, you realize you need to branch out. So that’s really my model now.”

Shepler plans to take his “nomad” concept a step further this year, using SXSW as leverage to serve at more national festivals — traveling to California for Coachella and to Tennessee for Bonnaroo.

“If we can cook for this many people, we can be successful at the smaller festivals, of just 100,000 people,” he laughed.

He’ll then return to Fort Collins in the summer to work the local festival circuit.

“Eventually if the city allows us to set up these parking lots … that’s another story. But when you’re fighting for a limited amount of brewery spots, it’s just tough.”

During the week of SXSW but also throughout the year, Austin has designated food truck parking lots, where vendors can serve lunch throughout the week. Denver has a similar setup in Civic Center Conservancy throughout the summer.

Fort Collins city law was updated in December, lifting the limit on food truck rallies from four per year, with no more than eight vendors at each event.

Now Fort Collins food truckers can have more frequent rallies, provided they get a park permit or work with a private property owner on a permanent location. The truckers have started working on a summerlong rally series that would extend the ones they started last August in City Park.

At those rallies, visitors will be able to try Nomad, as well as some of the newer FoCo food truck fare, from lobster rolls to specialty doughnuts, meatball sliders and breakfast tacos.

As for Nomad, Shepler says he finds inspiration in all this travel.

For SXSW, he has enlisted the help of a few friends and fellow Fort Collins food truck operators — Ryan Martin, formerly of Umami, and Curt Bear of Bear’s Backyard — as well as his mother. He needed all the help he could get to serve alongside some of the nation’s best mobile eateries.

There is Ms. P’s Electric Cock, Austin-based and featured on Food Network and the Cooking Channel for her famous fried chicken.

“That’s kind of the thing at these festivals, we all trade food amongst each other,” Shepler said.

So what does Fort Collins’ Nomad bring to the table?

A focus on Western fare, such as the corned-buffalo reuben and the Angus burger with bacon jam. And then some uniquely Northern Colorado hospitality.

“For these guys to come down here, I feel pretty honored that they want to be a part of this with me.”

Facing a city of 500,000 hungry festival-goers, at least, he thought: “Three of us food truck owners should be able to put our heads together.”